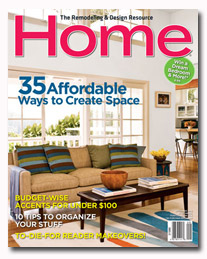 It appears that the down economy has claimed another victim: Home magazine.

Hachette Filipacchi Media U.S. today announced that it is suspending publication of the shelter title, effective with the October issue, citing steep declines in the middle market for the shelter category.

“It is difficult to close a magazine, particularly when it means that some of our colleagues’ positions will be affected,” Hachette president and CEO Jack Kliger said in a statement. “I want to thank the very talented editorial and sales teams for years of hard work and dedication to this brand.

“The current economic environment is difficult, and the mid-market home sector has been particularly hard hit,” Kliger continued. “When the middle market recovers, we will consider future publication of Home using the special interest publication newsstand model.”

Home’s ad pages plummeted 30.9 percent during the first half of 2008 over the first half 2007, according to the latest Publishers Information Bureau figures. Estimated revenue for the half was $21.49 million, down 30.4 percent from the same period last year.

HFMUS did not replace the editor-in-chief position at Home following former editor Olivia Monjo’s death in May. The publisher is considering options for finding Home staffers, including vice president and publisher Jack Grant, other positions within the company, a spokesperson tells FOLIO:.

Hachette hasn’t been shy about shutting down magazines it sees as under-performing. In recent years, the publisher has pulled the plug on For Me, Elle Girl and the controversial Shock.