HGTV Magazine & Food Network Magazine Continue to Increase Rate Bases in 2015
HGTV will grow to 1.2 million and FNM to 1.7 million. 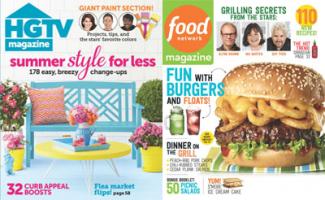 Hearst Magazines announced that both HGTV Magazine and Food Network Magazine will be increasing rate bases in 2015.

The change will be FNM‘s 12th increase in the six years since its launch, and the fourth and fifth during HGTV‘s two years of publication. The upward momentum for both magazines has been evident in their continuing growth. After HGTV‘s June/July 2012 launch with 500,000 opening rate base, it quickly rose to 700,000 in January 2013, then to 800,000 in July/August 2013 and again to 1 million in January 2014.

Current vice president, publisher and chief revenue officer Vicki Wellington launched FNM in June 2009 with a 450,000 rate base, and has increased consistently ever since, recently rising from 1.6 million in January 2014 to 1.65 million in the coming July/August 2014.

According to min‘s monthly boxscores, with the June 2014 issues of both magazines, HGTV Magazine‘s year-over-year saw an increase of 4.34%, and Food Network Magazine decreased 13.90%. Despite the decrease in print ad pages, Wellington said in a statement from Hearst Magazines, "Food Network Magazine continues its upward trajectory for yet another year."

The titles are published by Hearst Magazines through the partnership with their respective Scripps cable television networks.