Mobile is clearly where digital publishing is heading, according to Zinio’s Rich Maggiotto. Experimentation will continue, though, because no one has yet figured out the right business model for making money in mobile. “I do know one thing for certain,” he says. “Giving it away for free is not a business model.”

The market saturation of mobile devices is huge, with more than three billion units currently in use worldwide. Given the capabilities of those devices, including e-readers, that are on the market today, suppliers and publishers alike recognize that they’re not yet a good fit even for flat print magazine replicas let alone for the rich layout of multimedia digital versions. Magazines publishers use a two-page spread layout to communicate information visually. If you can’t view that layout on the mobile device due to the screen size (and, in the case of Amazon’s Kindle, it lacks color), the reading experience is not particularly satisfying.

But a surge in mobile delivery of magazines is clearly going to happen. Maggiotto expects some “pretty phenomenal things” to happen over the next 24 months. A lot of companies will be following up with new and different display technologies to compete for market share. And what publisher won’t want to tap into such an enormous, involved audience? 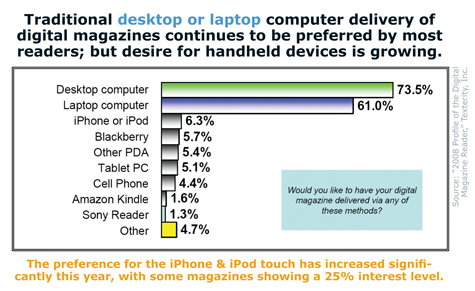 Nxtbook Media already has a handful of publishers using its Liberty mobile product, which has been available for a little over a year, but there’s not much opportunity right now, admits Marcus Grimm, marketing director. “Usage is low,” he says. “It’s more about planting your flag in the ground and letting your readers know that you care about the mobile space.”

While no one can predict whether people will prefer or even choose to read magazines on mobile devices in the next few years, readers are already being fractured into many different categories. Grimm believes “100 percent” in figuring out how to take the PDF supplied by publishers and crack it affordably into as many different formats as possible. “In today’s world,” he says, “there are so many different ways to render your content. You really have to step back, look at the content, and consider where a particular piece will be best received. Longer-format content plays well in a digital magazine, for example, while shorter formats play well on a Web site.”

Until that answer is clear, suppliers and publishers alike must make sure they don’t fall back too many steps.

Popular Science is working on mobile initiatives to get its content onto the iPhone and other devices but is holding back on making its entire magazine or its just-announced PopSci Genius Guide quarterly supplements available on the mobile platform. “We want the publication to be seen at regular size,” says editor-in-chief Mark Jannot. “But we don’t want to wait until the right mobile device is available and then have to put something together. We’re in the midst of a transition period.”