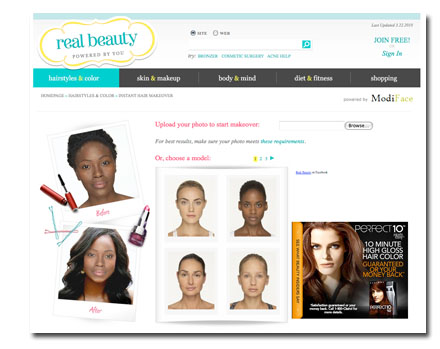 Hearst Magazines Digital Media has added a new makeover tool to its recently-launched RealBeauty.com. The tool allows users to experiment with make-up, hairstyles and weight-loss looks while identifying the specific products and techniques they would need to achieve that new look.

According to senior vice president and general manager Chuck Cordray, the new tool not only deepens RealBeauty.com’s content but provides advertising partners a new way to market their products. “The tool allows a user to know exactly which color and which product brand she’s choosing,” he says.

Different versions of the makeover tool also have been launched on Seventeen.com and MarieClaire.com. In all, seven Hearst sites will feature some iteration of the tool.

Cordray declined to say how many advertisers have bought into RealBeauty.com’s makeover tool but says the site is “essentially” sold out through the first half of the year and is anticipated to be sold out through the rest of 2010. “As fast as it’s growing, RealBeuty.com could be twice as large and our ad teams could sell that inventory,” he says. “There is significant interest.”

“We have hoped to end the first year (end of September) to be at a one million unique,” says Cordray. “And it seems like we are on our trajectory to get there.”