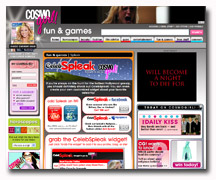 Hearst Digital Media has partnered with Spleak Media Network, a hybrid publishing platform that distributes a combination of user generated and professionally-generated content across a variety of networks including Facebook, MySpace, MSN Messenger and AIM, as well as through text messaging.

Hearst, the first mainstream media publisher to partner with Spleak, will provide original content from its Teen magazine, CosmoGirl, Seventeen and eSpin brands to be infused across CelebSpleak, a celebrity-focused network with more than 100,000 active daily users. The branded content will link back to Hearst Web sites and will be available via Web widgets, social networks like Facebook, instant message conversations and text alerts.

“Teens are in a lot of places online,” says Chris Johnson, vice president of digital media for Hearst. Johnson expects Hearst’s partnership with Spleak to bring in “a bit of traffic and a lot of learning” about what their audiences want and how they want to get it.

According to Spleak CEO Morrie Eisenberg, publishers do not pay to be included in the Spleak network. Spleak will eventually leverage its platform into interactive, immersive advertisements through viral quizzes and scavenger hunts where sponsor brands can get involved.

“In the rapidly changing content distribution industry, it’s important to reach audiences whenever and wherever they are interested in engaging with our content,” says Hearst Digital GM/VP Chuck Cordray.