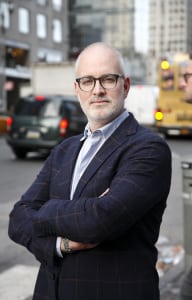 Hearst has parted ways with the president of its magazines division, Troy Young, the company said Thursday, a day after a report in The New York Times described multiple complaints of “bullying or harassing behavior” against him by staffers.

“Troy Young and I have agreed that it is in the best interest of all of us that he resign his position as president of Hearst Magazines, effective immediately,” Hearst CEO Steven Swartz informed staffers Thursday evening.

Debi Chirichella, currently executive VP and CFO of Hearst Magazines, will take over as acting president, leading day-to-day operations “for the days and weeks to come,” Swartz added in an update Friday.

Faced with allegations that one of its most powerful executives had a habit of making sexually suggestive remarks to women in the workplace, Hearst initially stood by Young.

In a statement to the Times, a company spokeswoman explained that his “relentless pursuit of excellence was at times combined with a brash demeanor that rubbed some the wrong way,” but added that he had “worked to develop a more inclusive management style” since his promotion from digital chief to global president of Hearst Magazines in 2018.

At least four employees had complained to the company’s human resources department about Young’s behavior prior to that promotion, the Times reported, though Chirichella denied this in her own memo to Hearst staffers Tuesday.

Young himself appeared defiant in the Times story, attributing the allegations to “my detractors” and insisting they were “either untrue, greatly exaggerated or taken out of context.”

In a subsequent memo to staff Thursday, he said that while he felt the article, which also described complaints of racial discrimination at Cosmopolitan, “misrepresented the culture” at Hearst Magazines, he admitted that he’d “lacked an awareness that, in my role, is critical” before issuing a general apology to his female coworkers and closing with, “I am listening.”

Hours later, a second memo, this one from Swartz, informed employees that Young was resigning.

Young had been an agent of change since joining the century-old publishing company as its first head of digital in 2013. When longtime Hearst Magazines chief David Carey stepped down in 2018, Young’s work overhauling a growing online operation that was mostly run separately from the print side of the businesses earned him the promotion over Joanna Coles, the company’s chief content officer and former editor-in-chief of Marie Claire and Cosmopolitan, who was widely speculated to be a rival candidate for the job.

Coles left Hearst a week later, while Carey returned to the company full-time in January as senior VP of public affairs and communications.

In addition to his role at Hearst Magazines, Young had served on the board of directors of the Interactive Advertising Bureau, and was elected chairman in February. After the Times story was published on Wednesday, IAB president and CEO Randall Rothenberg also seemed to defend Young in a Tweet, but as of Friday, Young’s name had been removed from the executive committee page on the IAB’s website.