Hearst to Launch Biannual Cosmopolitan Latina in 2012
Initial distribution at 545,000, with plans to increase in 2013.

Hearst’s Cosmopolitan brand is looking to make headway into the strong and growing Hispanic market through the launch of the new English-language Cosmopolitan Latina.

The standalone magazine, set to launch in May 2012, will be published in both print and digital format twice a year, starting with a distribution of 545,000 and with plans for an increase in frequency and distribution in 2013, according to Cosmopolitan publisher Donna Kalajian Lagani. The brand will have a “content hub” on Cosmopolitan.com for now, adds Lagani, but may eventually move to its own site. Former managing editor of Studio One Networks’ LasFabulosas.com. Michelle Herrera Mulligan will edit the product, along with a freelance and internal staff.

Cosmo “looked seriously” at its Latina readership following the “huge jump in the U.S. Hispanic population” revealed by the 2010 census, says Lagani. It found, as a result, that one in four Latina women between the ages of eighteen and thirty-four already reads Cosmo but that this reader demographic “would love to see content even more tailored to her specific needs, cultural identity and beauty and fashion sensibility.”

The brand’s 103,760-circ Cosmopolitan en Espanol is published only in Spanish, through a joint venture between Hearst and Virginia Gardens, Florida-based ET Publishing International LLC.

Bolstering Cosmo’s strategy is data from the Carat Hispanic Consumer Connection Study, which finds that 28 percent of Latina women are not served by the traditional strategy of marketing to Hispanic consumers in Spanish. “They are connected to their cultural roots, but are much more engaged with general market media,” says Lagani. Reaching them through general market channels “makes the most sense,” she says, but “there is a need to identify and amplify cultural cues and incorporate relevant Latina type content” within this realm.

Cosmo Latina expands an increasingly healthy Hispanic magazine sector, which saw a 26.5 percent bump in ad revenue year-over-year for the first ten months of 2011, according to Media Economics Group’s HispanicMagazineMonitor (HMM). This number suggests a rapid acceleration of growth compared to a 3.9 percent increase in ad revenue between 2010 and 2009 and a staggering 27.1 percent drop between 2009 and 2008.

Cosmo en Espanol ranked ninth with revenue at 3.8 million, a 42.7 percent increase from the same period 2010. 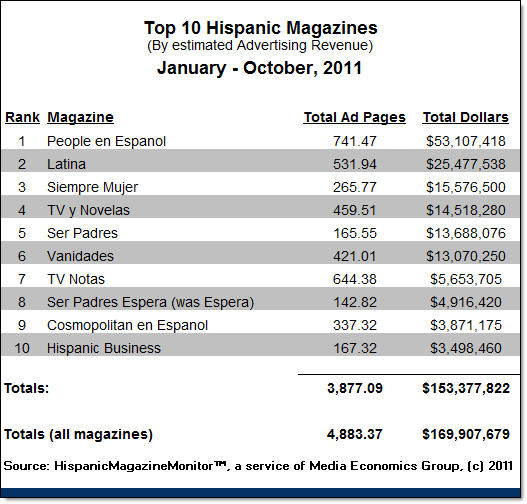