Hearst Claims More Than 300,000 Paid Circ. On Tablets and E-Readers
Paid digital audience is up 10x since last September. 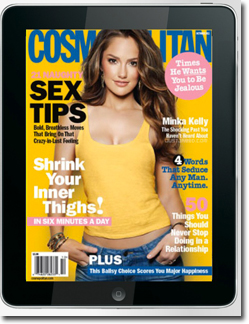 Hearst Magazines says it has eclipsed 300,000 paid distribution for its digital editions across multiple platforms including iTunes, B&N, Nook Color and the Zinio Newsstand.

That represents a 10x increase in monthly digital subscriptions and single copy sales over last September (the number also includes digital readership for former Hachette titles acquired by Hearst earlier this year). Hearst claims it’s the only magazine publisher to have its titles for sale on every device currently in the market.

According to publisher’s statements filed with ABC’s Rapid Report, Hearst’s Cosmopolitan led the way with 81,690 paid subscriptions to digital replicas as of June 2011, while Popular Mechanics reported 21,725 and Esquire had 20,997. O, The Oprah Magazine reported 12,567 paid subscriptions to digital replicas while Food Network Magazine had 10,554 as of June 2011.

"We’re very bullish on our digital subscription business and the potential for it to grow as new devices and platforms enter the market," says David Carey, president of Hearst Magazines, in a statement. "As consumers increasingly have more options for accessing magazine content, our strategy is to be everywhere, both to satisfy reader demand and capture additive audiences for our brands."

Monetizing digital editions has been a priority for Carey, who earlier this month said that a cable TV-style pricing model for content on tablets will help push Hearst’s digital revenue toward a 50/50 ratio between advertising and consumer payments.

"For the first time we get a chance to do price segmentatio n in a more intelligent way," Carey said at the Bloomberg Media Summit in March. "You see the way the cable companies do it–you get five different packages, from and all of a sudden you’re spending $200 a month before you know it. When presented with a tablet environment with a couple different options, some will opt for the full service, almost like your American Express Platinum card, and some people will take the Green card, and that’ll be great for us."

At the paidContent Advertising conference earlier this month, Carey said that 40 percent of digital single-copy sales occur after the physical magazine has gone off the newsstand.