Have Publishers Let Competitors Position Their Media?
Publishers need to change the label from "paid media" to "third party media." 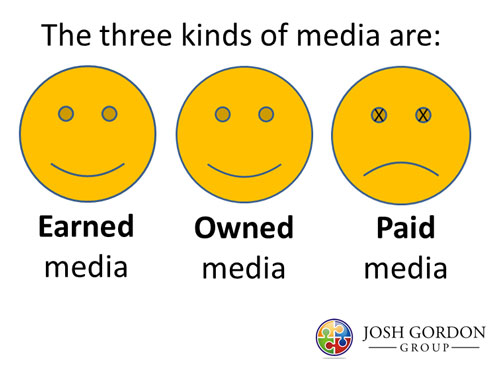 But consider the emotional message these labels send.

"Owning" your own media makes marketers feel great and in control. Owning is good!

Everyone loves to "earn" free exposure on social media platforms.

But who really wants to "pay" for exposure they might be able to get for free through social media?

Of the three media categories, only "paid media" is named for a negative characteristic.

How did this happen? These category names came into common use around 2008 when social media was being added to media budgets. With the need to contrast social media with traditional media, the social media centric thinking of the time renamed traditional media as it contrasts to social, suddenly we became "paid media." This label casts a negative implication every time it is used.

There is a fix. Publishers need to work to change the label from "paid media" to "third party media," which is more descriptive and offers a significant benefit. While earned and owned media are highly effective at reaching existing customers, third-party media is far more effective at reaching non-customers. Current customers are much more likely to visit a company website or subscribe to a company newsletter. Non-customers, less so. Current customers much more likely to participate with a company Facebook page or subscribe to a company Twitter feed. Non-customers, not so much.

In a study my company did earlier earlier this year that measured the marketing effectiveness of 34 companies in a B2B market and found  that marketing was effective with an average of 55.6 percent of current customers, but only with 10.6 percent of non-customers.

There is a real case to be made for the benefits of third-party media. The more important winning new customers is for marketers, the more important third-party media becomes. I we can reposition what we sell from being "the media you have to pay for" to being "the media that best communicates with NEW customers" our media sales job will get easier.