Harris’ Shuttered King to Relaunch as ‘The Women of King’
King goes to the queens. 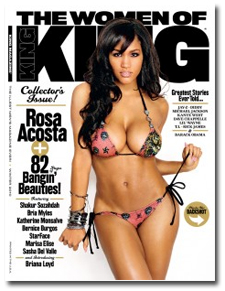 Watch out Playboy and Maxim.

This spring, Harris Publications pulled the plug on hip-hop magazine King. Now, sister publication XXL reported Friday that the magazine will be relaunched before the end of the year—with a new focus.

“To whet the appetite of the brand’s devoted fans … The Women of King will focus on the beautiful women that populate hip-hop’s biggest videos as well as the entertainment and modeling industry,” the XXL report said.

The photo-heavy relaunch issue, featuring model Rosa Acosta on the cover, will carry 82 pages and is expected to hit newsstands December 24.

It was not immediately clear what the new magazine’s circulation will be. A Harris representative could not be immediately reached for comment.

King isn’t the first hip-hop magazine to fold and find a new life this year. Vibe went out of business this summer but was later acquired by Uptwon Media Group and InterMedia Partners. The print edition relaunched December 15.

Giant, another hip-hop magazine, folded this month but will continue online as GIANTLife.com,