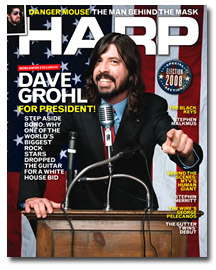 Guthrie CEO Glenn Sabin said Harp had struggled to become profitable since the company’s purchase of the magazine in 2003. “Unfortunately, Harp’s critical acclaim never translated into sustaining commercial success,” Sabin said in a statement. “Harp’s lifecycle was ill-timed with the precipitous decline of the music software industry, coupled with the consolidation of the consumer magazine newsstand business and rising paper postage costs.”

Harp was founded in 2001 by Scott Crawford, who served as editor-in-chief. The magazine had been distributed nationally and to 15 other countries.

According to the Web site Country Standard Time, Crawford broke the news to staffers last week in an e-mail. "It’s with a really heavy heart that I even have to write this. As many of you know, our cash flow had slowed recently,” Crawford wrote. “Due to various factors, including the current newsstand magazine slump, the majority shareholders of Guthrie Inc. Harp’s parent company, have decided to declare Chapter 7 bankruptcy."

Harp’s folding comes less than a month after Seattle-based alternative country music magazine No Depression announced that its May-June issue—its 75th—would be its last. The magazine’s founders attributed the demise to declining advertising revenues, which were down 30 to 40 percent, they said.