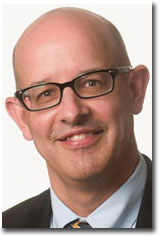 Shoop joined Government Executive in 1989, and acted as a feature writer for the following six years. He then quickly moved through the editorial ranks at the publication: he became executive editor in 1995; helped launch GovExec.com in 1996; moved to the editor-in-chief position in 2007 and was named vice president in 2010. Prior to joining Government Executive, Shoop was a supervising editor at Macmillan Publishing.

“When you work for a company like Atlantic Media, whose flagship magazine has published writers from Frederick Douglass to Martin Luther King, Jr., it’s humbling to say the least to accept an award for editorial courage and independence,” Shoop tells FOLIO:. “But I’m happy to do so knowing that the honor really recognizes the work of the Government Executive staff, who are out there every day doing bold, brave reporting about how government works — and doesn’t. I’m privileged to be able to lead and support their efforts.”

An ABM press statement identifies the characteristics of Timothy White Award winners, “Recipients serve as the “conscience” of their publications and fearlessly support important industry causes. They stand up to outside pressures — whether from advertisers, industry executives or upper management — that threaten to interfere with the goal of placing readers first and maintaining independent, honest and ethical journalism.”

White, for whom the honor was named, began his career with The Associated Press, and worked with Crawdaddy and Rolling Stone magazines.