Good to Let Subscribers Name Their Own Price
Campaign to benefit non-profits; in conjunction with Starbucks partnership. 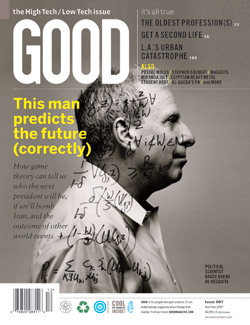 In the footsteps of other magazines like Paste and Premier Guitar, Good is launching a three-month-long campaign in which readers can name their own price for a yearlong subscription.

In addition to increasing its subscriber base, Good is hoping the initiative raises money for its Choose Good campaign, for which it donates 100 percent of its subscription revenue to nonprofit organizations, a Good spokesperson told FOLIO:. Since launching two years ago, Good has donated more than $850,000 to global non-profits, the company says.

The “choose your price” initiative, which kicks off Thursday, will be launched in conjunction with a partnership with Starbucks in which Good will publish the Good Sheet, a weekly newsprint publication featuring content the companies say will “bring Americans together to talk about issues that matter.”

“The Good Sheet is an unconventional, creative and fresh platform that will allow individuals to link up and discuss important social issues that touch us all,” Good CEO Jonathan Greenblatt said in a statement. The Good Sheet will be available in Starbucks locations over the next three months.

Greenblatt, who was named Good’s first CEO
in April, co-founded Ethos Water in 2002 and helped sell the company to
Starbucks three years later in 2005.

Late last year, Decatur, Georgia-based music magazine Paste launched
a month-long pay-what-you-want subscription offer which president Tim
Regan-Porter said added
roughly 28,000 paid subscribers to its list. The initiative was inspired by
experimental rock band Radiohead, which asked fans to pay what they wanted for
a digital download of its then most recent album.

The average price for a subscription to Good, which
publishes six times a year, is $20, according to the spokesperson.