Glenda Bailey Is One Grande ‘Dame’
The Harper’s Bazaar editor-in-chief is honored by the royals. 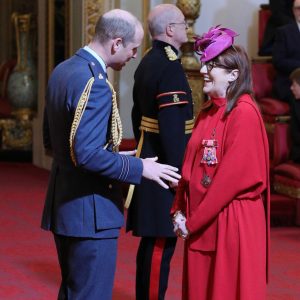 I first met Glenda Bailey for lunch in 1999, three years after she transitioned from founding editor-in-chief of the British Marie Claire to editor-in-chief of the fledgling U.S. edition—after Bonnie Fuller had left that magazine to succeed Helen Gurley Brown at Cosmopolitan. I recall being impressed by Bailey’s sincerity and activism, which had won the British MC two Amnesty International Awards for its coverage of human rights.

I only had one problem. It was difficult to understand her.

Bailey spoke in a thick East Midlands English accent, described in a New York Times report as “devoid of almost all grace notes.” It was not part of my reporting because Bailey’s diction was her business, not mine.

Further, Fuller, who by then had moved to Glamour, was said to be lobbying for the HB job, which the now-HollywoodLife.com president and editor-in-chief confirmed in her 2006 book, “The Joys of Much Too Much.”

Instead in May 2001, Black moved Bailey over to HB, where she is now celebrating her 18th anniversary as editor-in-chief.

That, in spite of early press reports calling her appearance, and, yes, her diction, inferior to that of fellow British expat and Vogue editor-in-chief Anna Wintour. The speculation du jour was that Paris Vogue EIC Carine Roitfeld would succeed Bailey, and that amplified in 2012 when then-Hearst Magazines president David Carey and Hearst Magazines International president Duncan Edwards named Roitfeld HB‘s global fashion director, a role in which she continues.

That she successfully transitioned from the print era to the multiplatform era—while holding steady the magazine’s readership and relevance—is impressive, and her 18-year tenure is now the longest at Hearst and second-longest in fashion magazines, after Wintour’s 31 years. May also marks eight years of Bailey’s ongoing partnership with HB publisher and chief revenue officer Carol Smith.

On May 9 at Buckingham Palace, Prince William presented Bailey as Dame Commander of the Order of the British Empire for her contributions to UK “prosperity, charity, fashion and journalism.” The royal honor has similarities to the U.S. Presidential Medal of Freedom, and Bailey joins such luminaries as Judith Anderson, the original “My Fair Lady,” Julie Andrews, Agatha Christie, Jane Goodall, Olivia de Havilland and, yes, Anna Wintour.