Gaining Traction With Consumers and Platforms, NewsGuard Draws Scrutiny From RT, WikiLeaks
Kremlin-linked outlets accuse the platform of plotting to silence independent media, rather than call out fake news. 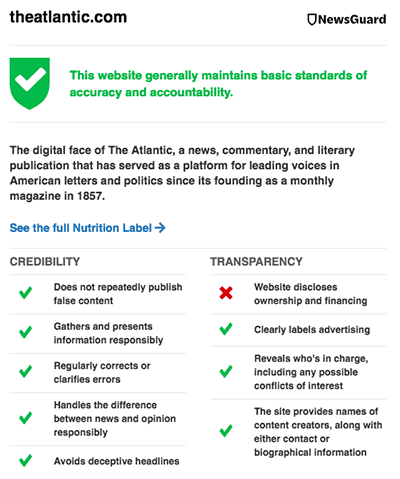 According to a new Gallup survey—which, it should be noted, was funded by NewsGuard and the Knight Foundation, a major investor—out of 706 U.S. adults who tried NewsGuard’s browser extension on a trial basis, 91 percent found the nutrition labels helpful, 78 percent would recommend NewsGuard to a friend and 69 percent reported that integrating NewsGuard into a search engine or social media platform would make them more trusting of that platform as a news source.

“We were delighted with the results,” Crovitz tells Folio:. “When we released the browser extension in late summer, we had hoped that consumers would have this kind of reaction.”

To date, about 30,000 people have downloaded the browser extension, currently available on Chrome, Safari, Firefox and Microsoft Edge. But since NewsGuard’s launch, the real challenge has always been getting Silicon Valley to provide the service as a built-in feature, rather than expecting consumers to download it themselves.

“We really launched the browser extension to give social media and search companies and browsers something concrete to use and take a look at,” Crovitz continues. “We were very pleasantly surprised when public libraries across the country saw the browser extension as a practical literacy tool, and many of them have downloaded it onto the computers that library patrons use. But our business model is to encourage the browsers and social media companies to integrate NewsGuard into their products.”

NewsGuard’s first major victory on that front came this week, with the announcement that Microsoft was integrating NewsGuard into beta versions of its Edge browser in Android and iOS devices (a public rollout is expected in the near future). Crovitz declined to go into details on any additional arrangements with browsers, search engines or social media platforms, but says more announcements can be anticipated. 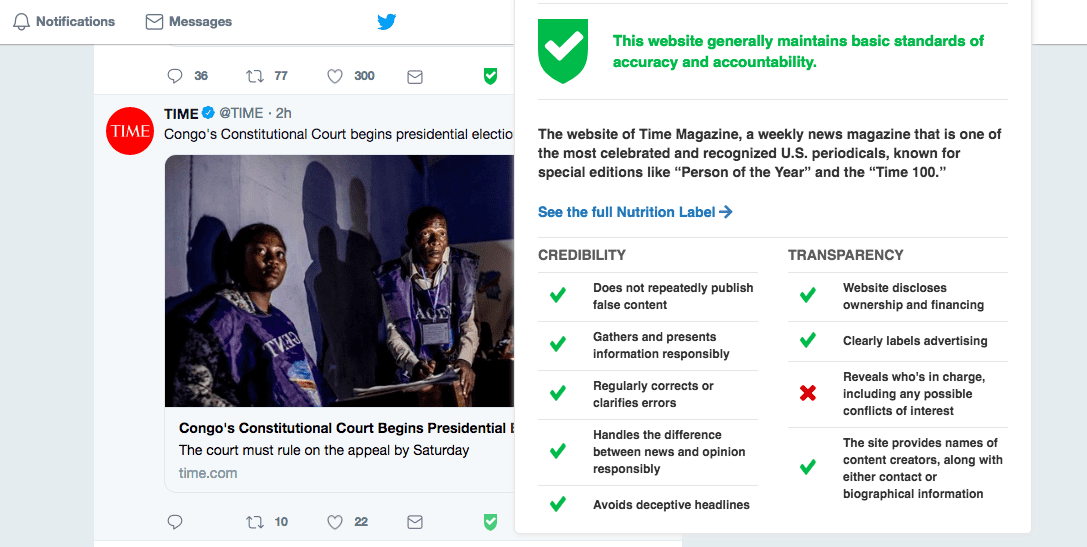 But not all of the headlines surrounding NewsGuard this week were positive.

A day after the results of the Gallup survey were publicized, a series of articles questioning NewsGuard’s motives proliferated across outlets linked to the Russian government: an article on RT.com meticulously detailing NewsGuard’s purported conflicts of interest; a news article and an opinion piece on Sputnik News accusing NewsGuard of “censorship” and “propaganda,” respectively, as well as a radio spot decrying “the war on alternative media;” even a TV news segment on RT America summarizing the same talking points.

The complaints essentially boil down to a few central theses:

To add perspective on the matter, the RT segment brought in political cartoonist Ted Rall, who asserted that NewsGuard’s ratings must be unreliable. How does he know? NewsGuard gave a green rating to the Los Angeles Times, who he is suing for defamation.

For some context around where, exactly, NewsGuard sets the bar: ThinkProgress, AlterNet, The Daily Caller and FoxNews.com all received green ratings; Palmer Report, The Daily Kos, InfoWars and Breitbart are rated untrustworthy. Sites given a red nutrition label are not blocked on browsers that have installed the extension, but are accompanied by a message urging caution when a user hovers his or her mouse over the NewsGuard icon.

By Monday, Wikileaks’ official accounts had picked up the story, tweeting out criticism of Crovitz and calling NewsGuard a “neocon app.” And on Tuesday, the feedback loop came full-circle, with both RT and Sputnik posting additional articles summarizing the Wikileaks criticism.

If citations are any indication, the whole thing began last Wednesday, when Mnar Muhawesh, editor-in-chief of the Minnesota-based site MintPress News, posted about an interaction she’d had with a reporter for NewsGuard who appeared to be fact-checking a series of old claims about MintPress that can be turned up by a cursory Google search.

Muhawesh was alarmed by the NewsGuard emissary’s “list of eight loaded questions” about the site she founded in 2012, which describes itself as a watchdog but generated some controversy in the past for its allegedly pro-Assad coverage of the Syrian Civil War. In the note, Muhawesh refuted nearly all of the claims about which the reporter inquired, immediately perceiving the questions as an attempt to undermine MintPress, and accused NewsGuard of harboring its own inherent bias, its founders’ true agenda little more than a thinly veiled attempt to “control the free flow of information that poses a threat to the war establishment and the corporations that fund them.”

“It was clear that NewsGuard was maliciously targeting MintPress by the loaded questions NewsGuard journalist Jennie Kamin sent me,” Muhawesh tells Folio:. “The reporter had either not visited our website to find the basic answers to her questions or purposely tried to frame MintPress as unprofessional.”

MintPress went on the offensive with a second, more detailed exclusive report detailing NewsGuard’s purported nefarious motives and shady ties, which quickly picked up hundreds of retweets. Within a day, the first article summarizing the same points appeared on RT.com.

EXCLUSIVE: As Newsguard’s project advances, it will soon become almost impossible to avoid this neocon-approved news site’s ranking systems on any technological device sold in the United States. @_whitneywebbhttps://t.co/ftH6QnVlDn

At press time, MintPress News is “still in the process of being rated,” according to NewsGuard.

Crovitz says the reports are being selective about the facts.

“We operate with radical transparency,” Crovitz added in a phone conversation Monday afternoon. “Everybody knows what our nine criteria are. If a publisher gets a red rating on any of those nine, it explains the reasons why. One thing that’s noteworthy about these reports is that they’re not trying to defend their practices as much as they’re attacking the fact that we have cybersecurity experts on our advisory board, and that sort of thing.” 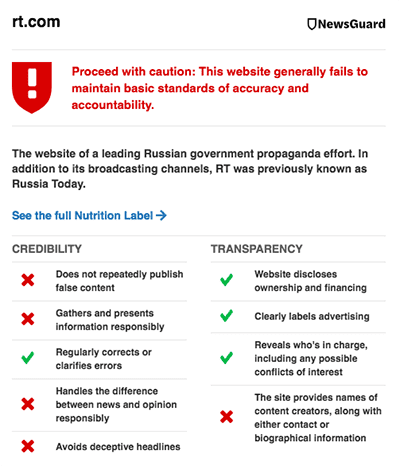 Crovitz denied that NewsGuard’s board and investors have any input on its rating process—which he says is handled by its staff of professional reporters, editors and fact checkers—and pointed out that NewsGuard makes no attempt to hide the identities of its investors and advisory board.

“Confronting fake news starts with educating people about media literacy at the school level and empowering citizens with the right tools so that we can think for ourselves to decipher what is true or not,” adds Muhawesh, who claims that “soft censorship and throttling” from platforms has led to steep declines in readership and ad revenue for MintPress.

“Having an entity like NewsGuard that works so closely with the political establishment to decide what is ‘real news’ and ‘fake news’ is dangerous as it will only lead to the control of information and mass censorship, leaving Americans little access to alternative information.”

Among the advisory board members who raised eyebrows at MintPress and RT, Richard Stengel, the former Time managing editor from 2006 to 2013, was later recruited by the Obama State Department to help counter ISIS propaganda online; but another, General Michael Hayden, has faced criticism for statements made as CIA and NSA director, particularly those concerning former CIA contractor and NSA leaker Edward Snowden.

“We make clear who our ownership is on our website. There’s no involvement of any government and there’s no government investment,” Crovitz says. “The advisory board includes people with different backgrounds. We have people who are in national security, people who are digital experts, we have journalists. We thought it was important to get guidance and advice from people who have been thinking about these issues of disinformation for a long time.”

NewsGuard declared RT—which claims editorial independence but receives the bulk of its funding from the Russian government and has been accused of spreading state propaganda—an untrustworthy news source at its inception, using it as an example of a “red-rated” news outlet even prior to launching the browser extension last year. Apart from a short video segment last March expressing skepticism about NewsGuard’s feasibility, however, this appears to be the first time RT has covered the startup.

This article has been updated with quotes from Mnar Muhawesh.

Clarification: A social media headline on this story, mentioning “Russian-linked news media,” was a reference to RT and Sputnik News. MintPress News is an independent, Minnesota-based news outlet.