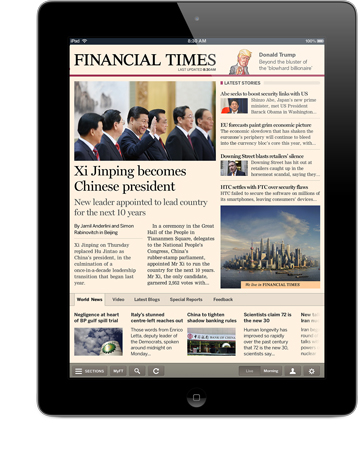 The Financial Times released a significantly redesigned version of its web app today, introducing dual static and dynamic content functionality as well as a rebuilt personalization hub called My FT.

While the FT has been making incremental updates to its app—which now has more than 3.7 million users—since causing a stir two years ago when the paper decided to largely forego the native app route, today it announced its first major reboot.

One of the biggest changes is offering readers both a static version of the morning paper along with a dynamically updated version that automatically updates throughout the day. "The big learning for us with the first app is how important the concept of a finite read is," says Steve Pinches, FT.com‘s group product manager. "Readers love the idea of starting with the FT in the morning and reading it all the way through, which is quite a different concept than on the web. It’s quite a balancing act because we also have a lot of more digitally savvy users who need that ongoing, up-to-the-minute coverage."

Pinches adds that in the coming weeks, the FT will continue to iterate on the dynamic features, introducing Fast FT, which will provide a more breaking news quality to the app.

That balance between the lean-back and lean-forward aspects of the app experience has been getting more attention lately. New York, for example, recently launched its new app with a home screen that’s divided in half—the top dedicated to daily content from the website and the bottom featuring the weekly issue cover.

In both cases, the idea is to pipe in more of the web content that’s being produced, which serves the dual role of exposing more content to the mobile audience while linking the static branded app experience to the more dynamic web experience.

Mobile is an increasingly bigger influence on web use as well. The FT says it accounts for 30 percent of FT.com’s pageviews and drives 15 percent of new subscriptions.

FT has added to that by collecting personalization features that had been spread around the app and FT.com into a single-page hub called My FT. Here, an adaptive personalization function presents suggested stories based on a reader’s previous article choices. Also available is a space where readers can collect clippings for later reference.

Importantly, MY FT allows subscribers to clip stories from FT.com for later reading within the web app. "We’ve put a lot more focus on movement between the two platforms," says Pinches.