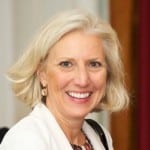 Just two months after concluding her four-year term as president and CEO of MPA, The Association of Magazine Media, Linda Thomas Brooks is taking on a new role: interim managing director of Connectiv, the division of the Software & Information Industry Association (SIIA) that represents the B2B side of the media industry.

After several years on the agency side of the industry, including as managing director of GM Mediaworks and president of the Martin Agency’s Ingenuity Media Group, Brooks joined the MPA at the start of 2016, navigating the association through a period of unprecedented consolidation among its largest members and, in outreach to advertisers, emphasizing the scale and devotion of consumer magazines’ audiences across the totality of their channels: print, digital, video and social media.

She stepped down as president and CEO at the end of last year, after the MPA’s board of directors voted to concentrate the association’s resources on legislative and regulatory advocacy, closing its New York headquarters and transferring all operations to its Washington, D.C. office. Brigitte Schmidt Gwyn, who joined the MPA early in 2019 as executive VP of government affairs, was named the association’s new president and CEO in January.

“I’m excited to join Connectiv and work with so many leading brands that are helping redefine the information industry,” Brooks told Connectiv’s Matt Kinsman in a blog post on Tuesday. “B2B has been at the forefront of media companies diversifying revenue streams toward events and recurring revenue models. I look forward to working with members to help them continue to move their businesses forward.”

Formerly known as American Business Media (ABM), the association was rebranded as Connectiv in 2015 and absorbed Association Media & Publishing, which represents the publishing divisions of non-profit associations, in 2017.