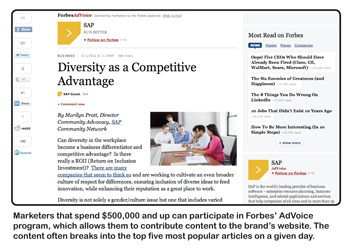 A couple years ago, Forbes broke ground on what it calls its “most significant re-architecture” in its 90-plus years of existence. The goal, according to chief product officer Lewis D’Vorkin, was to “increase the interaction between content creators, audiences and marketers.”

In effect, it’s been a process of putting the content creator “at the center of experience,” says Mark Howard, Forbes Media’s senior vice president of digital advertising strategy. Since then, Forbes has grown its contributor base to more than 1,000 academics, journalists and experts from a variety of fields who pass through what Howard calls a “firm vetting process” and bring to Forbes their own audiences, networks and followings. In April, the site drew nearly 30 million unique visitors—much of which derived through social media.

In the last year, social media referral traffic to Forbes.com increased by almost 800 percent—up from 2 percent to just under 20 percent of the total. In 2011, Forbes.com was the seventh most shared content producer on LinkedIn, with general news outlets taking up the first six spots.
The strategy is supported by sharing tools that follow users down the page. Each piece of content features a byline of the individual, with the ability to follow that contributor via the Facebook “subscribe” plugin that was integrated into the site at the end of last year.

“We’ve created this social journalism platform that functions very social media-like,” says Howard. “You can follow different journalists and experts and have real, active conversations through the comments field. The dialogue is extending.”

Since November 2011, this strategy has also extended to advertisers through Forbes’ AdVoice platform. AdVoice invites marketers who spend $500,000 or more within a quarter on advertising with Forbes to produce and distribute content through the same content creation and CMS tools used by Forbes.com’s journalists and contributors. SAP, the platform’s initial sponsor, has been publishing with AdVoice since its launch. Howard says it’s not uncommon for SAP stories to break into Forbes.com’s top five popular articles on a given day.

“This is not a promotional section, this is their opportunity to tell their stories and to share their expertise around their areas of business,” says Howard.  As with non-marketer contributors’ content, Forbes.com staff does not edit the content but does expect creators to uphold certain standards. “We do closely monitor for authenticity and accuracy,” he adds, “but the responsibility is ultimately on the marketer, just like any other content creator.”

Forbes currently has five sponsors running on AdVoice, including Dell and Microsoft Dynamics, and has had as many as seven at one time. Each piece of content written by a sponsor includes the AdVoice logo, beside which is a red link titled, “What’s This?” A pop-up screen lets readers know that it’s the marketers’ voices they’re reading.

“In this era of social media, it’s important to utilize your expertise and the voices within your organization that come through as authentic to engage with your audience, to expose your brand to other journalists and other companies’ followers,” says Howard. “Marketers have been creating content for a long time. The challenge is to efficiently drive users to where that content is housed. Our platform brings this new level of credibility and the opportunity to engage with people who are already in that information-seeking mindset.”