Food Network Magazine Raises Rate Base for Sixth Time in Two Years
Another 100,000 issues will be added with the January/February edition. 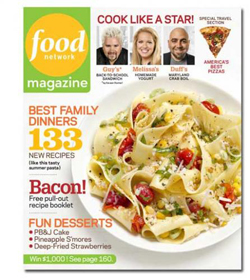 Once identified as the most notable magazine launch of the year in 2009, Hearst’s Food Network magazine is continuing to ride a wave of reader enthusiasm with the announcement of its sixth rate base increase since the title went live.

Test issues were first contemplated back in the fall of 2008 with an initial circulation pool of 300,000 issues-now the rate base will reach 1.4 million, up from 1.3 million, effective with the January/February 2012 issue.

According to its first-half 2011 ABC report, total circulation fell around 1, 473,000 with more than 338,000 single-copies sold, which represents a five percent increase over the previous reporting period, a news release from Hearst says.

The title was also the biggest ad page gainer for 2010, according to the Publisher’s Information Bureau, which said at the time the magazine was up 78 percent to 796.5 pages.