Food Network Magazine to Raise Rate Base Twice in 2013
Second 2013 increase will be the title’s ninth since its debut. 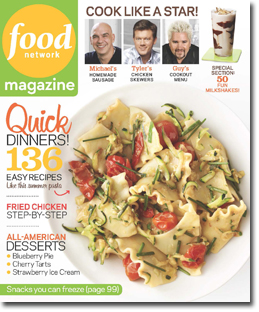 Hearst’s Food Network Magazine plans to hike its rate base twice in the coming year. The January/February 2013 issue will mark an increase from 1.45 to 1.5 million, and the rate base will increase again to 1.55 million with the title’s July/August 2013 issue. These hikes represent the eighth and ninth rate base increases for the publication since its 2009 debut.

“This story has been the same since it launched: It’s a consumer story,” says Food Network Magazine VP/publisher/chief revenue officer Vicki Wellington. “With Food Network on air 17 to 18 years, reaching a million households; online and the research which [Food Network owner] Scripps does constantly, asking viewers what they want more of. Consumers wanted this product in magazine form.”

The magazine just underwent its most recent rate base increase with its July/August 2012 issue, now at 1.45 million.

Newsstand sales aren’t the only fruitful revenue stream for Food Network Magazine. Wellington discusses the title’s advertising success, “According to [FOLIO: sister publication] min, through the June issue we’re up 15 percent, and the epicurean set is down 8 percent. We’re the sixth largest selling newsstand magazine, and up in every selling category. People who don’t do print are investing money; we have advertisers running 360s with us.”

Despite a still rocky media terrain, Wellington doesn’t anticipate a plateau for Food Network Magazine any time soon, “We’ve been delivering 1.6 million for some time, so we’ve been over: delivering a solid 200,000 per issue for the whole second half of last year, and the whole first half of this year.”