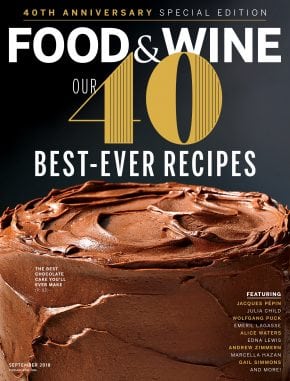 Four decades after debuting as an insert in a 1978 issue of Playboy, Food & Wine’s 40th Anniversary campaign celebrates not only its 24,000 published recipes and its collaborations with world-renowned chefs, but also the year of growth the brand experienced across its digital, social, video, events and print platforms.

“The goal is to definitely mark the occasion, to mark our 40th year as a brand,” says editor-in-chief Hunter Lewis. “And to celebrate the people who left such an indelible mark on our food culture at large in America, but also who have made their impact in the pages of Food & Wine.”

While the 40th Anniversary Special Edition issue serves as a documentation of F&W’s impact on the culinary space in America—featuring 40 of the “best-ever” recipes from each year of the brand’s history and features from brand-favorite celebrity chefs—Lewis says that the campaign is meant to transcend the print edition in order to serve as an “evergreen package online,” and serve as a high performer in newsletters and on social, including through the participatory campaign on Instagram, #cookthe40.

For F&W, hashtag challenges through social media, like calling readers to cook the 40 featured recipes in the 40th Anniversary issue, often serve as a way to capitalize on audience engagement in an attempt to make any of the brand’s campaigns to have a well-rounded reach across its platforms. “We wanted feedback from people from our audience. We wanted to have a conversation and continue to celebrate these recipes,” he says.

“The way that we operate when we launch our biggest franchises or special issues or biggest campaigns, we typically do it in a 360 way,” Lewis tells Folio:. How the franchise looks on print and digital is the initial step, but then strategizing the social platforms is crucial part for the brand. 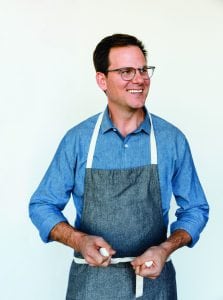 However, creating cross-platform campaigns, while they must be tailored for each audience, is one area that Lewis says the culinary space has a leg-up in. “The beauty of food is, if you engineer a great recipe and you take a beautiful photo of it and a great video of it, that could work across multiple platforms. So really, food content, and recipe content specifically, is very valuable in that way.”

Lewis also recognizes that the food space is a crowded one, so in his first year he has worked to make the brand stand out.

“The new way forward is to be more diverse, both in the people we’re covering and the bylines who are telling stories, but also in terms of geography and the region where we’re covering food,” says Lewis, which is an area of change that he’s working to include in the recently redesigned print edition that launched this past June.

At the time of the redesign, the monthly magazine had a total circulation of just under one million, and as with most redesigns, one of the main goals for Lewis was creating easier navigation and more defined sections for the benefit of the readers. Another important objective was to bring more of the food and drink to the front of the book, particularly to the “Handbook” section, which focuses on hands-on, home cooking and is the most popular section among readers.

But ultimately, ensuring that the passions of the F&W staff comes through on every page is what Lewis wants the redesign to strive for. “We talk a lot about service and hospitality among our team and that’s part of our culture, so every page has to have some kind of takeaway,” he says. “To have great service, and then the hospitality is how do we make you feel, whether it’s through the tone and the warmth of the imagery.”

Lewis says that F&W operates both in a consumer and a b2b capacity because its audience consists a broad spectrum of food-lovers. “We operate in this liminal zone between consumer civilians, who are sophisticated home cooks and entertainers, and then the restaurant, wine and spirits, and hotel industry—the pro levels.”

The brand’s audience has grown beyond the city borders of places like New York and San Francisco, and now represents the broader United States population, which in Lewis’ opinion, has changed incredibly over the past few decades.

“There is this whole revolution of the past 40 years that started in the early 80s soon after F&W launched,” he says. “There’s been this explosion of culinary talent in the frame of American chefs, and there has been the growth of quality ingredients that farmers are now growing and artisans are now making. It’s not because of F&W, but F&W has been a part of the rise.”

Even with a broad readership, and one of the largest Twitter followings in the culinary space with 6.64 million followers, Lewis is still looking for innovative platforms for his brand to reach new audiences, including through restaurants, television and video.

“We just launched a fast casual restaurant in Atlanta, we also have one down in Florida, and that’s a good new way to share F&W with people who maybe haven’t been following us for a long time,” he says.

In terms of video and television as platforms, the brand’s partnership with HSN has begun to open F&W up to shoppers and viewers who may not have heard of the magazine before. Beyond that, Lewis says that he commissioned a 14-minute-long mini-documentary this year about the Best New Chefs franchise in order to share how the three-decades-long campaign has impacted the American cuisine space.

In general, however, he points to television as a promising area of growth for Meredith as a whole. “TV is a high interest for the company. Meredith owns 13 television stations and we are in talks with production companies about TV shows all the time,” he says.

“We have a history of the brand being on TV and I certainly think that TV will continue to be a point of focus for us moving forward and thinking about brand development,” he tells Folio:.

With the brand’s digital engagement up over the past year, including 89 percent YOY growth on FoodAndWine.com and 1 billion recorded impressions across all of its platforms, Lewis says that newsletters have been an instrumental tool in gaining pageviews.

“The newsletter audience is loyal—they’re opting into your experience, so you need to keep delivering the goods to them,” he says, continuing that that platform is one the brand will experiment with more. “I think one thing that we’ll do further down the road is doing newsletters with more voice, with more narrative coming directly from our editors.”

As for capitalizing on this digital boom, Lewis says that implementing a digital subscription or a paywall is not a strategy that Meredith is considering at the moment for its Food brands.

“I can’t speak for the company’s strategy on that yet, but I can say that right now, there are not plans for a paywall for everybody.” However, Lewis does say that something worth investigating, for any brand, is if its hyper engaged consumers, like those who “pay top dollar to come to our events,” would be willing to invest in higher levels of service.

“The biggest challenges [for digital] beyond frequency is understanding and quickly adapting to any algorithm change.”

Lewis believes that in certain ways, social media companies have improved their communication with the media when implementing adjustments to their algorithms, however, its up to media brands to stay on top of those changes to figure out how to adjust their strategies to maximize their engagement on the platform. “All of that informs your content strategy and what your staff and your talent might be able to do, and where you’re going to direct your focus.”

And because social acts as one of the brand’s greatest opportunities for reaching broader audiences, these algorithm-based distribution platforms are ones that F&W will continue to focus its outreach on. “I think for us, we’ll continue to adapt and continue to evolve. That’s just part of playing the game. As the rules change, we have to make sure we adapt to them,” he says.