Folio: Show Dives Deep Into Data on Opening Day
With hours of programming on a number topics, data was at the crux of nearly every conversation. 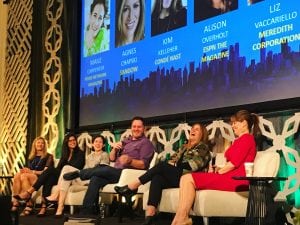 New York—Data, for many years now, holds a huge stake in how advertisers and publishers operate. But a question that publishers kept asking themselves at the 2018 Folio: Show is can data dictate everything?

The answer? Well, it depends.

The Folio: Show hosted its second day of presentations, panels, and discussions covering the present and future of the publishing industry on Tuesday. While data has become a clear driver of what companies do from a planning perspective, nothing has replaced the onus and importance of content. And sometimes, depending on the organization, the content still can drive planning.

The first panel of the day, “Power Up Your Future: Where Publishers Are Placing Their Bets to Grow,” Bonnie Kintzer, president and CEO of Trusted Media Brands, detailed the experience with Family Handyman, and how the right content can lead to new learnings, which creates new avenues for growth.

The publication for do-it-yourselfers initially targeted content based on what their community told them they needed to know. This led to massive successes – such as the ‘How to Fix the Toilet,’ which is one of its most read pieces on the site. From there, Kintzer’s publication realized that this community of readers wanted more in-depth, detailed advice and they were willing to pay for it. The success of the content provided the data for expansion. From there, Family Handyman created individual, highly detailed classes, which can range from $200 to $400 a session. They have expanded further to step into B2B marketing, where their editorial knowledge within the home improvement space can be sold to industry vets.

“What is it that the audience wants,” advises Kintzer. “Give it to them in the manner they want it in.”

This process can be platform agnostic, added Eric Zinczenko, CEO of Bonnier. “You can continue to reach consumers on a variety of platforms,” including print, he said. But in order to take advantage of the platform–whichever you choose–you first have to have “the data and metrics” to support it.

Keynote speaker, Seth Dallaire, vice president of global ad sales at Amazon, spoke more directly about the metrics during his conversation. “Insights, are the core proposition we bring to buyers,” said Dallaire. As Amazon looks to extend its reach in the advertising space, encouraging brands to extend content into their e-commerce page with Amazon’s help, it’s these insights in which Dallaire and his team are using to entice companies.

While metrics have become the end-all-be-all, it isn’t the primary guide for all ideas. Every once in a while, an idea that’s too good to pass is pursued, even without the data support. These are the ideas that create truly special moments.

In the late morning panel, “A Fundamental Truth: Content Is Still King,” Sam Martin, vice president of strategy and business development at Leafly, a review site for marijuana, said that he launched a $500,000 campaign to build a long-form Internet series called “Growers.” Without a distribution network – since cannabis companies can’t advertise on Facebook or Twitter – they used the legal dispensaries across the U.S. to spread the content. Many of these dispensaries have screens up all day long, and they were willing to include the show on their televisions. “It performed fairly well,” said Martin, who then added with a chuckle, “I should have tested it.”

Croi McNamara, senior V.P. of video programming at Condé Nast Entertainment, said that nearly 100% of their content is driven by data. And when she joined the company, her first effort was to get rid of going after “gut projects.” Now, that the company has embraced the data driven approach, she’s more willing to look for those unique opportunities that may not have the insight to support it. Condé’s “highly selective” with the opportunities, said McNamara. “When we do make those, it works,” which is often the type of series that leads to awards.

This data-led excursion within the industry had long turned many organizations away from print as digital became the primary focus for many titles. But for print publications, there isn’t this fear of data anymore. And, more importantly, much of the data is pointing their publishers back to print, which was discussed at the “What’s the Future of Print” panel in the afternoon. More publishers are viewing print as a way to cut through the clutter readers are exposed to and reach those that enjoy the magazine as a platform.

Maile Carpenter, editor in chief at Food Network Magazine, explained why the company decided to launch its second title, Pioneer Woman, just last year. The brand, which started from a blog, grew into a television show on the Food Network, and then a magazine, needed a way so viewers could connect with brand off-screen, said Carpenter. The magazine added “another touch point” for interaction, beyond the show and digital content, which they can enjoy in their spare time.

The issue when it comes to magazines, and all publications, is who will end up paying for the content, even as all these insights drive the next move. After over 400 conversations with advertising executives and others for his book “Frenemies,” famed author and media critic for The New Yorker and keynote speaker Ken Auletta believes that the biggest hiccup to publishing and advertising success may lie in the consumer. They’re not used to purchasing content and they don’t want to be advertised to.