Smaller consumer publishers are seeing big changes as well. Kalmbach Publishing, which has magazines in the crafts, models and astronomy markets, bought Discover Magazine. (Who could have predicted that when Discover went on the block in May?) Music magazine Paste folded after a “last-minute complication” killed a deal for outside funding, while the editor of racing magazine Speedway Illustrated bought the rights to the title after it folded and  plans a return to print.

Paid subscriptions represented the second largest revenue stream for consumer publishers in 2009 and 2010, with very slight growth this year. 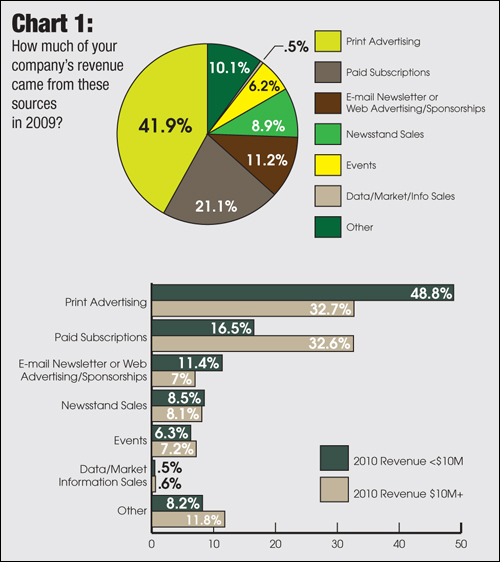 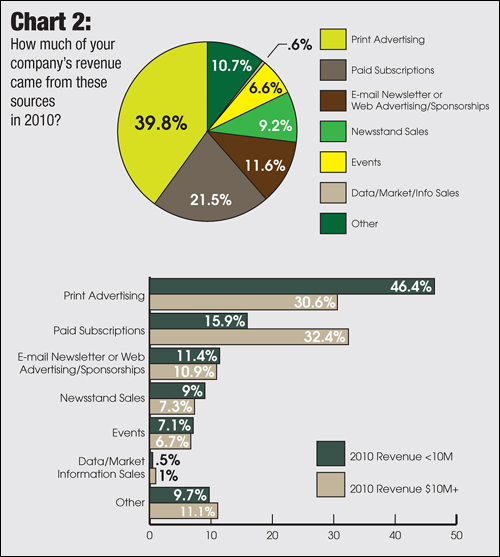 Many consumer publishers are reporting revenue gains in 2010, although that’s typically in comparison to the disaster of 2009, rather than the pre-collapse numbers of 2008. However, many publishers are starting to see the cost-cutting and efficiency initiatives they enacted in late 2008 and early 2009 start to come through, bumping up profits. Sixteen percent of both large and small publishers reported they expect overall profitability to be 30 percent or more in 2010, compared to just 9 percent who expected the same last year [Charts 3 and 4]. Thirty-three percent expect profits in the 20-29 percent range (up from 17 percent last year) while 36 percent expect profits to be in the 10 to 14 percent range, compared to 23 percent last year.

Still, 20 percent  of respondents say they won’t be profitable this year, compared to 29 percent who weren’t profitable last year. 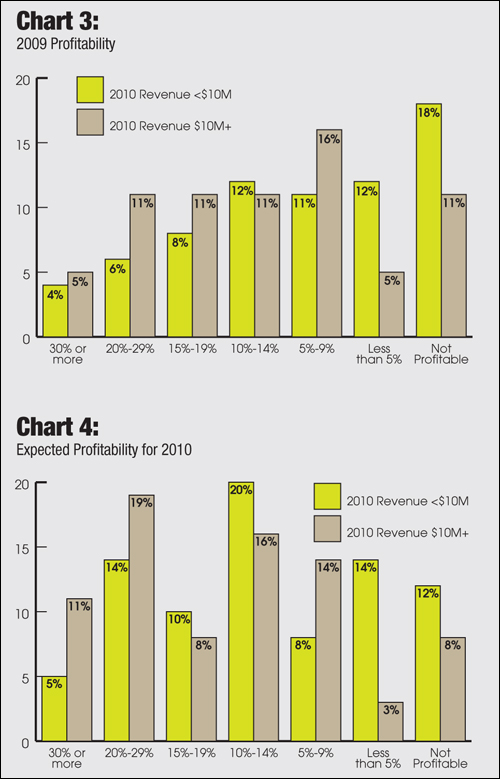 Fastest Growing Parts of the Business

Much of the buzz surrounds the iPad and with good reason. Wired’s iPad downloads beat newsstand sales without cannibalizing print. However, Apple remains a difficult partner in terms of both getting apps approved and limiting publisher control over audience and revenue (Sports Illustrated saw its app rejected  due to a proposed subscription model that would offer the iPad to print subscribers for free this year with new readers buying content a month at the time). Other digital vendors are scrambling to offer publishers an alternative to selling subscriptions to the iPad and other devices.

Some publishers are trying to define their own e-products. At a time when magazine publishers are racing to market with applications for tablets and smartphones, Bonnier Corp. and Interweave have launched new digital products specifically for viewing on desktops and laptops. Bonnier launched Skiing Interactive, a digital edition with unique content and advertising that was developed specifically for accessing on a computer. Each issue will include features like a navigation scroll bar at the bottom, high definition cover videos, interactive maps and ads that allow users to click through for additional product information.

Separately, Loveland, Colorado-based enthusiast publisher Interweave has launched Quilting Arts in Stitches. The e-publication is available for purchase in Interweave’s e-commerce Web site for $14.97 per issue.

While just 24 percent of smaller publishers and 5 percent of larger publishers said print was one of their fastest growing revenue streams, print is actually surpassing expectations for some publishers.

November will be one the The Atlantic’s best issues ever and the Financial Times, which expected content revenue to surpass print advertising this year, has postponed that prediction until next year due to an unexpected jump in print advertising revenue.

But while print advertising may be showing signs of life, newsstand sales continue to disappoint. Most respondents say they expect newsstand sales to stay the same, while 27 percent of larger publishers and 19 percent of smaller publishers expect an increase [Chart 9]. An almost even number of larger and smaller consumer publishers expect newsstand sales to decrease in 2010. In the first half of this year, unit sales of audited consumer magazines declined to 320 million—a drop 7.6 percent. Revenue declined to $1.28 billion—a fall of 6.7 percent. “Newsstand is our biggest disappointment, other than some success we’ve had with Barnes & Noble and maybe Borders,” says one respondent.

Since 2008, unit sales are down 22.3 percent and revenue off 19.9 percent, while the industry is selling nearly 25 percent fewer copies than it did just a few years ago, according to newsstand consultant Baird Davis.

Still, some publishers are looking to the newsstand for success with specialty issues. After shuttering Gourmet last fall and announcing the brand will be relaunched as a digital product called Gourmet Live that will be available on multiple devices, Condé Nast is bringing Gourmet back to print in the form of three newsstand-only digital editions, starting with Gourmet Quick Kitchen. A spokesperson declined to say what Gourmet Quick Kitchen’s exact distribution will be, but says the model is “based on efficiency and a smaller print run.” The debut issue carries a $10.99 cover price. 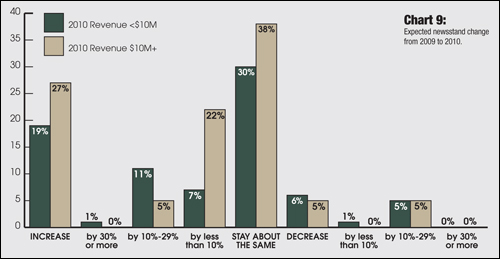 Sales and profitability remain the biggest challenges for publishers for the remainder of 2010 and going into 2011 [Chart 10]. However, a significant 27 percent say business development is one of their biggest challenges as well. “We aren’t able to access working capital to allow for expansion,” says one respondent.

Still, 25 percent of smaller publishers and 41 percent of larger publishers say they plan to launch an ancillary service this year [Chart 11]. “We’re launching new print products and see an expansion of our events business,” says one respondent.

And with the rampant changes in consumer publishing leadership, there could be dramatic changes in the business models over the next year as well. In announcing the promotion of Robert Sauerberg to president, Condé Nast CEO Charles Townsend said the company needs to “move away from the magazine.”

“Print is still a key medium for Condé Nast and will be for a long time to come,” Sauerberg told FOLIO: “However, it is not our only focus. Technology and consumer expectations have changed dramatically, and we think this is the moment to double down on the opportunities before us. Our success will be based on being able to provide our content seamlessly across every appropriate platform that exists.”

The survey sample of 1,000 was selected by Red 7 Media and Readex Research and included FOLIO: recipients classified as executive management titles at consumer publishing organizations. Materials production, addressing, mailing and tabulation were all handled by Readex Research. Data was collected via mail survey from May 24 to July 13, 2010. The survey was closed for tabulation with 211 usable responses. The margin of error is plus or minus 6.4% at the 95% confidence level.