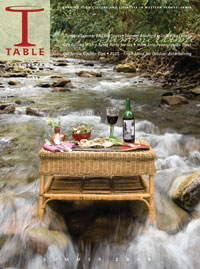 One of three-year old Table’s goals, according to editor and publisher Christina French, is to “change the way people think about the role food plays in their lives.” For its summer issue, this southwestern Pennsylvania regional food and culture magazine proved its dedication to this topic—photographer Craig Thompson, wearing waders, literally placed his tripod in the middle of a stream; the team situated the table, found on the steps of a nearby cabin, between rocks to support the plate, wine bottle, glass and food; and a chef cooked up a meal of trout, native to the stream, over a campfire nearby.

“The table literally in the stream represents how our local food sits literally in the middle of the stream of our lifestyle, health and experiences on a daily basis,” says French. “We don’t have the luxury of just shooting beauty shots of lamb chops with perfect lighting. Our goal is to engage the reader with the situation of food, not the food itself.”

The original concept was to shoot a “meticulously dressed table” streamside, French says. Thompson suggested putting the table in the stream to “keep it rustic” and encouraged the team to swap the card table they brought for one they found in the woods.

Photos from the shoot were used for both the cover and the corresponding story, which focuses on trout fishing in the region. Thompson says the image wasn’t Photoshopped at all—he used slower shutter speed and longer exposure to enhance the perceived water depth and speed. John McWilliams, who does design and layout for the magazine, says he had to make slight changes to the color saturation to make it look more “summery” than it was at the time of the shoot.

“While I like the ‘T’ logo, it’s too small and subtle to work on newsstands and looks more like a company logo (for possibly a furniture manufacturer). The other type is also way too small and subtle which contributes to making it look like a catalog. It wasn’t until the third or fourth look that I saw “summertime” behind the cover lines at top. Good camouflage, but hiding type on the cover seems pointless. The photo is fun but I would have liked a better view of what’s on the table. Is the recipe inside? If so, it should say that and showcase the dish better. Also, I wonder if the absurd set-up with the table in the stream will draw people in or have the opposite effect.”

“The photo is pretty amazing when thinking of how it was constructed. That said, there are a few technical mistakes such as type getting lost and darkness issues which would be an obstacle when competing on newsstand. It definitely has a retro 1970s feel to it, which makes sense (sort of) when you think of western Pennsylvania.”

“The ‘T’ masthead icon has promise intellectually but is poorly executed, and the overlaid field seems out of proportion to the page. The tagline-as-skyline would be better suited in a display font. The image itself grabs me right away. It’s a shame the coverlines are completely lost and appear to be an afterthought typographically. I am confused about the message. I want to enjoy this meal visually, but can’t seem to pull up a chair.”