Face Up: The Washingtonian 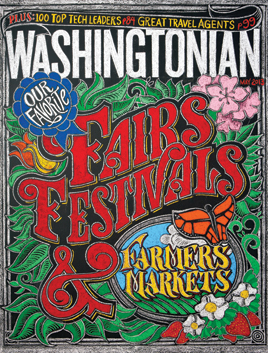 D.C.-based monthly The Washingtonian wanted to highlight an age-old community tradition with it’s May issue: Fairs, festivals and farmers markets.

“It’s the first time we’ve actually done this as a cover package,” says creative director Michael Goesele. “A lot of city and regional magazines have been feeling the pinch since 2008, like everyone else, so this is something new and different.”

The package highlights seasonal, regional events with over 100 listings of local fairs, festivals and farmers markets—letting the publication have an extended touch point with readers because it acts like a guide well beyond the month of May.

“We were going back and forth to try and determine what we wanted to do with the cover because they are three distinctly different things,” he says.

The team ultimately decided to feature a seasonal theme. Goesele contacted chalk artist Jeff Nelson who created the homegrown look, which was actually a 5×7 foot free-hand drawing that was photographed and scaled down so that it would translate to print.

“In this day and age, everything is produced digitally but deep down we’re still tactile beings and I think that’s why magazines will be around for a long time—we love touching paper,” says Goesele. “That’s why it was very important to me to have the literal mark of the hand on the cover.”

“Jeff Nelson’s artwork is perfectly evocative of the colorful, handmade deliciousness of local fairs, festivals, and farmers markets. It’s a terrific sell for summertime activities and makes the magazine feel like a resource to save.

“I love the boldness of a complete cover take-over, no line of copy is too small for his impeccable lettering. There are no smudges! This richly detailed chalkboard is truly an intricate mix of considered illustration and well-crafted typography, it rolls several jobs into one.

“The result feels as rich and ephemeral as summertime’s bounty. It makes you want to get out and enjoy those flowers and strawberries as soon as possible. Well done!”

“This is simply stunning! Not only are the graphics and type hand-drawn, but the entire cover right down to the logo and date, is drawn in chalk. In this digital age, I am always in awe of the old-school approach.

“Craftsmanship aside, the choice of style and medium marries well to the subject, it really invokes the feeling of warm weather, strolling through the aisles of your local farmers market, and looking at the colorful signs inviting you to buy fresh produce.”

“Washingtonian’s hand-drawn cover is fun, playful and a welcome departure from the standard newsstand cover design. That said, three minor tweaks would have made a good cover great. The split center cross-strokes on the ‘F’ and ‘E’ letter forms (in main headline) are awkward, hindering its legibility. A slight increase in the letter-spacing of the same headline would also help its readability and lessen the density of the cover.

“Finally, it would have been best to have the top banner swoop downward over the top right portion of the logo to alleviate the tension between the banner’s bottom edge and the top of the logo.”

Watch the timelapse video of the creation of this Washingtonian cover: