Face Up: US Banker 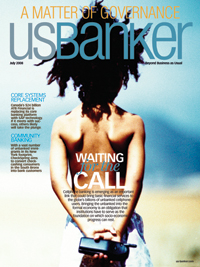 US Banker’s July 2008 cover was one of firsts for a few reasons. One, Jason Pohl, creative director at sister magazine Bank Technology News, substituted for usual US Banker creative director Andrew Lathrop, who was on vacation.

Second, both the story and the cover represented a change in focus and style for the b-to-b magazine. The story, “Waiting for the Call,” looked at how banking and technology can be powerful tools to help impoverished countries pull themselves out of poverty. “It was a pretty broad ranging story, with a focus on Africa, Asia and Latin America,” says Pohl. “The story falls outside our normal editorial boundaries, which tend to be more U.S.-focused or profile driven. Our usual covers tend to be portraitures of bankers.”

Themes of the story were about opportunity and advocacy. “We’re saying to our audience that there’s all these countries that are tech savvy and early adopters and there is a tremendous opportunity for banks to develop relationships with these regions to not only make money but also do a good deal of lending some aid,” says Pohl. “They should be there because it’s the right thing to do. We were trying to shake it up a bit and print something unexpected. What was so compelling to me about the image was there was a hopefulness and an expectancy to it that captures the story.”

The initial thought for the cover was a reportage but most of the materials were specific to one region, which didn’t speak to the scope of the story. Finally, after beating the bush with AP, Reuters and Corbis, the staff discovered the photo of a child holding the phone on Getty. Pohl re-arranged the vertical positioning of the photo for the magazine cover but the color and graininess of the image were in the original shot.

“We were running out of time and the story wasn’t coming together, so all thoughts of shooting went out of the window,” says Pohl. “Sometimes you get lucky.”

“Although this image is visually arresting, I think the cover is a miss overall. The reader has to work too hard to get the concept, and the typography seems better suited to an article opener, not the 10 second decision of a cover.

The image and the cover text don’t seem to work together. It looks more like a vacation planning issue than an emerging market banking problem. And the long description below the title is hard to read and evidence that the title isn’t very clear in the first place. I don’t think this design supports the content.”

“This cover leaves me perplexed and slightly angry. At first I thought it was the back of a naked woman and was annoyed US Banker felt the need to fall back on ‘sexy’ to get their reader to pick the magazine up. Upon further review I realized it is actually a child. A half-clothed child as a representation of developing countries is condescending.

As far as the typography goes, it is fairly clean. Though it would have been more refined if the type was not on top of the figure, especially when there is space around the photo to work with.”