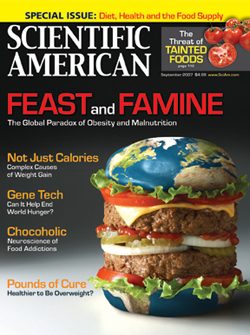 Creating a more modern, appealing look while continuing to engage readers is what Scientific American editor John Rennie was hoping to accomplish when he and his art department set out earlier this year to brush up the magazine’s cover design. Developed by associate art director Mark Clemens and contributing art director Lucy Reading-Ikkanda, the redesign wasn’t drastic, Rennie says, but enough to give the magazine a fresh look. The redesigned cover was unveiled with the July 2007 issue.

“Much of the new cover’s structure is similar to that of the old one, but the elements are all updated,” Rennie explains. “The headline type is now standardized as Eurostyle, which was a fresher, more readable sans-serif. In contrast, for our cover logo, we actually switched back to a Capital serif because it contrasted nicely with the headlines and hinted at Scientific American’s 162 years of tradition.”

For the cover of the September 2007 issue, Scientific American art director Edward Bell pulled his inspiration directly from the cover story, “Feast and Famine: The Global Paradox of Obesity and Malnutrition.”

“We were trying to give the reader a quick sense that there is an abundance of the wrong kind of food all over the world and, in context of the headline, show that some people are starving, while others are gorging on junk food,” says Bell.

He pitched the concept to artist Kenn Brown, who had the idea of mapping the world directly onto food. “While the cover image does not touch on the subject of famine, it does reflect the stories on overeating, junk food, fat, diet and weight problems,” Bell says. “The image in the top right corner of the cover shows a sliced tomato, which reveals a danger symbol and reflects the threat of tainted foods.”

“I love the cover. The magazine has changed a lot since my older brother would lug a few home from his breaks at MIT … it’s great to see a mainstream cover concept.”
– Don Salkaln, Successful Meetings

“The nameplate of the magazine gets lost in all of the clutter. My eye really does not know where to focus. The font choice for the headlines competes with the nameplate, and the secondary image for the Tainted Foods detracts from the nameplate, too. There is no hierarchy to this cover. Almost everything is the same size or same intensity.”
– Debra Bates-Schrott, Bates Creative Group

“They could have done without the black-to-white gradation in the background. There is already a lot of things going on and the gradation only adds to the clutter.”
– Brian Taylor, National Defense Magazine