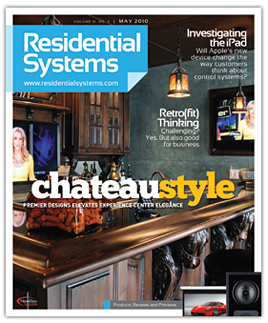 For titles like Residential Systems, which covers industry news about A/V design and installation, the stars of its pages are the flat screen TVs, home entertainment systems, e-readers and other gear that the editors are reviewing. But according to art director Todd Berkowitz, the original cover design of the magazine wasn’t allowing those images to shine.

“The old design was a little dated, and although the title is gear-oriented, it wasn’t doing enough to actually display the gear,” he says. “The typography was stale and the logo was taking up so much space across the top that the images had to be made smaller.”

Berkowitz and editor-in-chief Jeremy Glowacki came up with a more modern look that allows the art to fill up the white space in the pages. They also made the logo on the cover a smaller element. The redesign, however, wasn’t only about showing off the gear. Most of the shots taken for each cover feature the gear in home environments.

“On the May cover, we got some great shots of this amazing bar that featured beautiful handcrafted woodwork and I wanted to show that as well,” says Berkowitz. “The technology is important, but that photo had such great depth to it. Plus, the issue is filled with lots of tech information, so I wanted something on the cover that would emphasize the residential aspect of Residential Systems.”

Berkowitz decided to find a completely new font for the cover and use it throughout the magazine. For the main cover line, “Chateau Style,” he chose a font that would be thick enough to stand on its own, but not compete with the font in the logo. “It was very difficult to find just the right font for the word ‘chateau’ because it can have so many different meanings,” he says. “But I found one that had movement to it and I placed it in the middle in such a way that it looks like it would jettison off the bar.”

For an “edgier” look, Berkowitz added a triangle at the edge of the logo to make it appear as if the corner were folded. “I like having a logo kind of like a stamp,” he says. “Something that stays in place forever, but would allow the photo to still be the focus of the cover.”

This redesign needs a redesign. The new logo is an improvement but I am not a fan of the dog-eared blue sticker it is on. The main headline stomps on the photo, which incomprehensibly features two giant TVs in a kitchen with the same program only feet apart. The two tiny photos peeking in from the lower right corner are much too timid with their teeny blurb.

The new redesign of Residential Systems takes a giant step forward in speaking to its subject matter. The typefaces are modern and edgy, but still manage to work well with rather staid and elegant interior shot. The device at the lower right that calls attention to the Product section is also very nice. It gives just enough information without getting in the way. Great job.

The new nameplate has a generic quality that is exacerbated by the use of 100 percent cyan-only on the field. The prominence of the Web address further devalues the title, as if insisting the reader go directly online. The typeface—Sansation—lacks sophistication and has problematical spacing. The busy insets in the bottom corner confuse more than attract interest. The AV systems that ought to be the focus are relegated to the edges of the image—the focus inadvertently becomes the light fixture. The main headline obscures the horizon line of the photograph and thus highlights unimportant details below it. The subhead is clumsily written and fails to engage the reader.