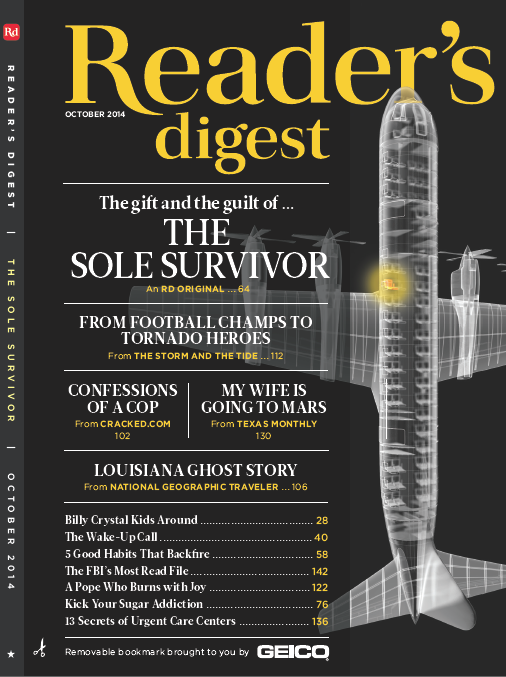 Last year Reader’s Digest reimagined the design of its nearly 100-year-old magazine. And several months later, design director Dean Abatemarco is confident that the new design vision has hit its stride. "The Sole Survivor" wasn’t the only consideration for the cover, Abatemarco admits. "We had another big story called ‘How to Crack America’s Sugar Problem,’" he says. "The opener is an incredible photograph of an exploding lollipop. We mocked it up as a cover and it looked fantastic, but it just wasn’t as good as our final choice."

To pull of the airplane visual, Abatemarco and art director Marti Golon worked with Bryan Christie Design. The studio’s Joe Lertola offered several versions. Abatemarco says there was a lot of back and forth, but he gave Lertola plenty of creative license.

A big obstacle was producing an image that easily translated as an airplane. Abatemarco says that a few of the angles just didn’t work because they muted the wings and the tailfin, making it seem more like a 3D rendering of a pen as opposed to an airplane.

Of course, when it comes to Reader’s Digest, there is another consistent challenge—trim size.

The small format might be a nightmare for some de- signers, but it’s a challenge that Abatemarco welcomes every month. Likewise, the cover flap—which also serves as a sponsored, removable bookmark—requires a lot of creative thinking.

"One of the exciting things about this format is that it can accommodate a lot of different looks," he says. "But a real challenge was the color of the flap. I was really pushing for black on black. But it presented a technical snafu. We really wanted to do a varnish on the flap but it was just too expensive so we went with a slightly cheaper version that allowed for an offset between the flap and the cover."

Reader’s Digest’s decision to change its logo by making the word "Reader’s" more prominent was a great choice. It just makes sense. In my opinion, "Digest" is not a very sexy word, but when it interacts with the letter R it becomes solid, anchoring nicely on top. The logo maintains a classic look, but is still approachable and—dare I say—fun!

The cover is strong and clever. The airplane illustration illuminates beautifully on a black background, adding a strong contrast to the schematics of the plane, allowing the "the one survivor seat" to stand out well.

The redesigned logo is a bit of a nod to its history and feels classic and timeless—pretty serifs, emphasizing that yes; these are collections of edited stories (hence "digest"). The word digest also sits on the flap; more obvious on some other covers I’ve seen this year, which leads your eye to the table of contents and gives the design intention.

I also like that they get to have the best of both worlds on the cover with the "tear away" panel—the Monocle approach of listing lots of stories emphasizes the stories within and announces this is a "digest."

I am still coming to terms with "sponsored" logos on covers.

The imagery is sophisticated and the black background is very dramatic (not melodramatic), and a nice departure from some of the older covers which seemed to pack a lot of color and "stickers" onto a very small canvas. The transparency effect on the tear-away panel also complements the x-ray image and helps the panel "float" a bit-not easy to juggle that hierarchy but it’s successfully done here.

The cropping on the propeller at far right feels a bit like a mistake- with some snippets of blades showing. 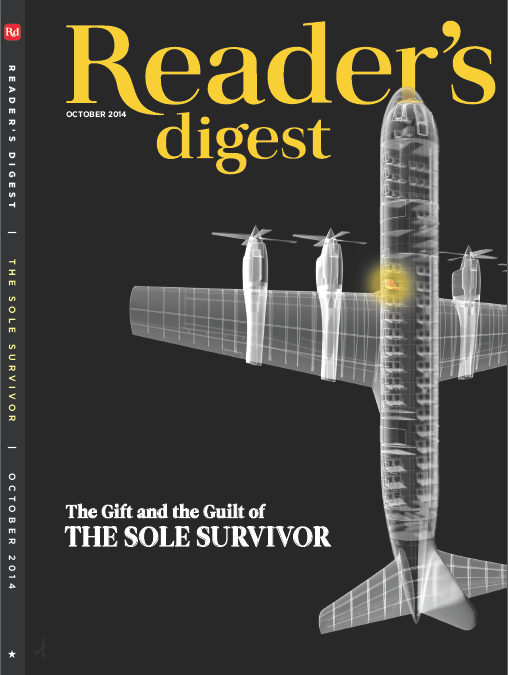