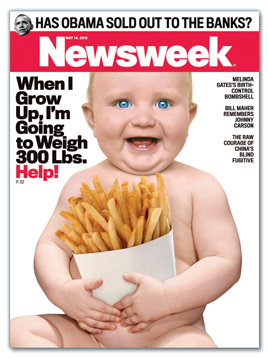 Making light of a national issue is dangerous territory, but Newsweek dove headfirst into the challenge with its May 14th issue. Featuring a bright-eyed infant clutching a carton of French fries, a left-aligned headline reads, “When I Grow Up, I’m Going to Weigh 300 Lbs. Help!” The feature story targets obesity, a crisis with enough weight (pun intended) that even First Lady Michelle Obama has become involved in the fight against it.

Dirk Barnett, creative director for Newsweek & The Daily Beast, says that the final cover was a direct product of the initial concept. After instructing the publication’s photo staff to locate a baby with “Michelin Man-like arms and legs,” Barnett’s team created a sketch of the cover.

“We enlisted two different photographers to photograph our fat baby, but in the end, we came back to the sketch. We felt that it not only nailed the message, but it felt more conceptual in execution and suggested a fantastical, rather than a direct, photo shoot of a fat baby,” Barnett tells FOLIO:.

In the end, a “Franken-baby” composed of a head from one picture, a body from another and a still-life image of the snack landed on the cover.

When asked if he and his team faced any challenges while producing this cover, Barnett says, “The trick with this type of cover is to not let it look cheesy and gimmicky. In this case, we sort of embraced the cheese and went a little SPY Magazine on purpose to have a little fun with a tricky, possibly offensive subject.”

“I like the message they’re trying to portray and the imagery supports the cover line. The scale ratio of the fries to hands seems a bit off, but it’s close enough to not catch at a quick glance across a newsstand and the stark white background gives the image the room it needs to make a powerful impact. However, structurally I think the image could have been improved with a slightly higher crop on the baby’s nether region, so there’s about half an inch less legs showing, and the baby’s head moved in front of the masthead.

The secondary cover lines don’t work for my taste. I’ve had it ingrained in me to never let a hanging hyphen get past proofing. The ‘birth-control’ split seems like an unfinished type element followed by what feels like stagnant typesetting for a newsstand.”

“While the subject matter is laudable, and truly the obesity problems do start that early, this photo makes me feel like the baby deserves it. It’s hard to know how much is messed with in the photo besides the fries from another dimension, but it doesn’t seem like the zombie aspect was necessary; a plain old cute baby might have made the point more cannily. The cropping on the bottom edge comes off a bit porny. What if the word ‘Help!’ was not there? The cover lines might have had a more ominous tone in contrast to the in-your-face image.”