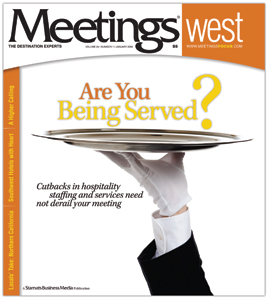 The January 2010 issue of Meetings West, a regional meeting destination publication, marked the launch of the title’s redesign, which focused on increasing the visibility of its state-of-the-industry features. “Normally, our destination features make the covers,” says brand design director Scott Easton. “But with the redesign, we retooled everything to evoke a new look and feel to the magazine.”
Instead of choosing a vast desert or the inside of a city museum as a backdrop for the cover, the design team chose a feature entitled “Are You Being Served?” as the cover story, which focused on the cutbacks in hotel hospitality budgets as a result of the economic recession.

Easton says that the team wanted the cover to help convince readers that the meetings industry was still intact and serving its clientele despite the cutbacks. They went with an image of a server’s hand holding a silver tray against a white background. “We wanted the focal point of the cover to be the platter,” Easton says. “We wanted to show that there’s no need to be alarmed because the hospitality industry is still going strong.”

Because of time constraints, an online stock image for the hand and tray were used, but the background was dropped off in favor of a white one. After some color correction and cropping, the work was done, as the color and font of the cover line were predetermined as part of the redesign. “We were really just trying to convey that there was more to the story that what you’re seeing on the cover,” Easton says.

The one element they debated was the question mark. “We seldom have questions being asked on our cover, so we were going back and forth asking ourselves, ‘Do you accentuate the question mark or not?’” Easton says. “We decided we would and used a larger mark than normal.”

In the future, Meetings West will feature a mixture of concept covers like the January 2010 issue and destination covers. “The editors have good reason for selecting the destinations that they do,” he says. “But at the same time, we’ll continue to emphasize the concerns that our readers have about the industry.”

I liked the photo, but I would have rotated the platter slightly and put the message “Are You Being Served?” on it. Or maybe I would have put it on a napkin, a card or a piece of paper and then lay it on the tray as a part of the photo. I might have even stacked the words on top of the platter. But at the same time, putting a headline above the photo makes it less visible to readers than putting it below. And to fill the space below, I might have also made the font of the subhead larger and san sarif. Using the color yellow in headlines isn’t my favorite thing to do, and why two different colors for the headline? Other than that, I really liked it.

The January cover of Meetings West pulls me in different directions. On one hand, the logo treatment on the top and the vertical cover lines running up the spine feel modern and contemporary. To me, this shows a touch of “Web” influence. However, the cliché stock photo of the butler and tray doesn’t work for me coupled with the headline. After reading the deck, I understand the use of an empty tray, but the tray no longer seems empty when it is serving up a weak headline.

In this instance, the proverbial “white-gloved hand holding a tray rising into the picture” solution becomes more than a cliché—it is boring. This might be an anomaly. A review of other Meetings West covers reveals some great art direction (Palm Springs in particular). This cover, though, lacks anything original. Given the precarious nature of the magazine business, this is no time to go cliché in your art direction.