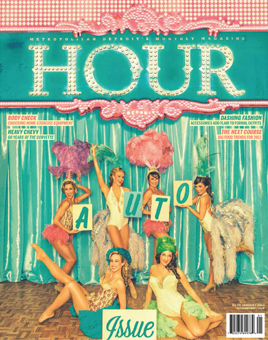 In the Motor City, the North American International Auto Show (NAIMS), also known as the Detroit Auto Show, is much more than just a car expo. Being one of the city’s local magazine, Hour Detroit recognizes that the title must capture the essence of the auto show while also cutting through the storm of coverage surrounding the event.

“The auto show is a really big event in Detroit so I wanted to take the event side of it as opposed to the cars,” says Cassidy Zobl, art director for Hour Detroit. “Everyone knows there are cars, and everyone loves the cars here, but there are events for weeks surrounding the auto show. I wanted to make it seem more fun and inviting. And, if you don’t necessarily like cars, something like this will still grab your eye because it’s so loud.”

The showgirls on the cover, which are actually members of the Detroit Piston’s Dance Team, are a nod to the 1950s and help capture the spectacle that is the auto show.

Zobl hired an illustrator to create the Vegas-style Hour name, but said she ran into some trouble.

“When the whole sign was on the cover, the Hour name was tiny,” she says. “The photographer, he is a Photoshop genius, ended up taking, piece by piece, the CGI sign and reconstructing it so that it would fit in with the space. The first couple times we tried, the girls were much smaller and it didn’t look right because the sign was so big. Getting that to fit in took about a week of tweaking, just for the sign.”

“The cover image is well thought-out and executed as a complete piece—including the masthead components neatly integrated into the art (not easy to pull off!). But I am distracted by continuity and the execution struggles between photography and illustration, type and colors.

“Cover cut lines set in a white field is often a result of poor cover space and background planning, but here it compliments the headline-on-white-cards typographical approach.

“In general, the cover is a delightful, warm, and an innovative concept, which would have benefited from greater attention to composition and execution details.”

“As a city magazine, you don’t want the cover of your Auto Issue to be confused for a car enthusiast title. Hour Detroit avoids this in a playful way by leaving out the Corvettes, and focusing on the kitschy spectacle.

“They pull off the period look very nicely through lighting, costuming, hair, makeup and garishly oversaturated colors. The vintage show card concept they’re going for allows for the illustrated marquee that they’ve added in post, but they would’ve earned big points if that sign and those lights were practical. (And they would’ve blown their budget in a big way as a result, I’m sure.)

“Their commitment to the concept extends to their treatment of secondary cover lines—which really recede as a result.

“Personal preference aside, I think this is a really fun and optimistic cover, and I’m glad they went with this approach.”