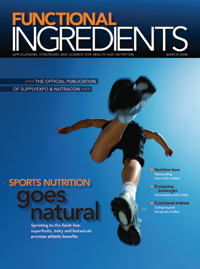 Each month, Functional Ingredients faces a challenge—to create a visually appealing cover while showcasing a topic that doesn’t necessarily lend itself to an exciting image. Most of the time, says Brenda Gallagher, the magazine’s graphic designer, she and Peter Sofroniou, the magazine’s editorial director, get together and discuss which articles work best visually, staying away from stories about powder, paste and other elements.

But in March, the magazine was holding its tradeshow, which presented “an excuse to get away from ingredients,” Sofroniou says. The story they chose to highlight on the cover was about sports nutrition so they wanted to feature an athlete but without “getting caught up in what kind,” says Gallagher.

“We wanted it to be slightly abstract, to show the benefit to any athlete,” Sofroniou says. “We didn’t want it to look like a sports cover or a running magazine.”

The main image came from iStockphoto.com, a member-generated portal of for-purchase stock photography, illustrations, flash files and videos that Gallagher swears by. “We have a very limited art budget, and the magazine needs to be turned around quickly. Their images are inexpensive which can lead people to think they’re not high quality, but in my experience they are,” she says.

Once she chose the photo, she increased the page board, pulled the lead out and adjusted the size so there wasn’t, as Sofroniou says, “so much focus on his butt.”

At first, Gallagher included a shaded bar along the bottom with fruits and berries—ingredients mentioned in the story—but found it took too much away from the central image, so she took it out. For the following issue, the magazine dutifully went back to ingredients, with gingko and ginseng on the cover.

“The unique image perspective works well but is disconnected with the main headline.‘Sports Nutrition Jumps Ahead’ would tie in much better, as an action headline is needed with such an active image. Also, given current trends in magazine design, the drop shadow on the headline is unnecessary. The typography is clean and current but, to keep the reader’s eye moving, the secondary deks should be moved to the bottom right corner and should be larger to help with readability. Also, indents should be consistent. Overall, this cover serves its intended audience and with a few tweaks can reach the next level.”

“The incredibly dynamic image juxtaposed with the flat, 2-dimensional typography of the magazine title is striking. The image gives you a feeling of moving forward, into the future. The modern feel of the image, along with the clean, modern typography is refreshing. It makes the subject matter of this magazine visually very interesting.”

“Functional Ingredients has a clean and simple type treatment for the logo and cover lines. The cover was safe but could have been pushed further. The image itself is dynamic, but it begs to be larger and more dominating on the page. The same for the main cover line. ‘Goes Natural’ gets lost because of the dark color. Everything appears about the same weight visually, and a good cover always shows hierarchy of important info.”