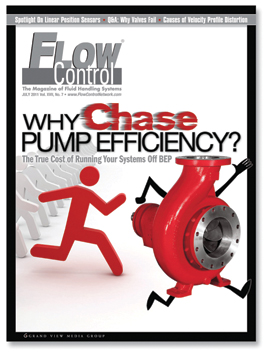 In the b-to-b sector, delivering clearly reported content is key; unfortunately, this often leaves little room for creative license. At Flow Control, staff uses the covers of their publication as a way not only to depict editorial, but also “give the audience some interest,” says art director Julie Flynn. “The magazine is straight forward, and I worked to make the cover light and really capture the reader’s attention.”

Matt Migliore, executive director of content with FC, says, “The cover story [‘Why Chase Pump Efficiency?’] defines pump efficiency curves, in terms of pump life, to better explain why it’s in the user’s best interest to chase even the smallest improvements in efficiency.” Flynn used the cover space as a platform to play up the concept, setting up stock images of white and red figurines in a chase scene with a product shot of a pump.

To further animate the art, Flynn integrated arms and legs to render the pump into a moving figure, almost edging it off the cover to create a three-dimensional effect. Photoshop was used to manipulate the word “chase” to make the scene even more dynamic.

“The ink jet box [containing the magazine’s logo and other information] is always a challenge with placement,” says Flynn. “We had it at the bottom, we had it all over the place.” Flynn decided to situate it toward the top of the space. Additional copy was then placed above the ink jet box, in hopes the consumer would view the cover from top to bottom.

The red, black and silver palette is a favorite of Migliore’s. Flynn sparingly added in a metallic finish, “to add a little pop,” she says.

“In a previous life, I worked for a publishing company that specialized in trade magazines (hello, Workplace Ergonomics Monthly!). I understand the challenge of designing a compelling cover for a magazine that deals in concepts/topics rather than personalities. Regardless of the magazine, the challenge is still the same. You want someone to pick up your publication. That requires an attractive, compelling, active cover. Flow Control’s art director is 95 percent there. By animating the pump as a stick figure and mixing the media (metallic surfaces vs. cutout figures), they’ve given the cover energy, depth and a dash of whimsy. The black and red color palette certainly adds urgency as well. I only wish that the art director had trusted his/her main art and kept the headline treatment simpler. Blurring the word ‘chase’ was unnecessary. It feels clumsy compared to the crispness of the imagery and remaining typography. All in all, though, nicely done. It should appeal to the intended audience. And that’s the ultimate goal.”

“Kudos to the creative mind that designed a cover for fluid handling systems that is eye-catching, engaging and even a bit humorous.  Putting arms and legs on the red pump and then offsetting it with the red running person image is very effective.  Adding the grey running ‘shadows’ and having the pump’s arm and leg outlined over the rule at the edge of the page adds nice depth. Font use is effective in both style and color, and adding the motion effect to the bigger, heavier type for ‘chase’ helps balance the elements, adds to the illusion of movement and makes for a nice visual pun. A good use of white space also keeps the cover uncluttered. The only minor change that might improve the look of this cover would be to nest the grey box containing the cover lines inside of the border rules, allowing the full thickness of the black border to show up evenly around the page. But, hey, I’m interested in reading the cover story and I don’t even know what ‘BEP’ means! Nice job.”