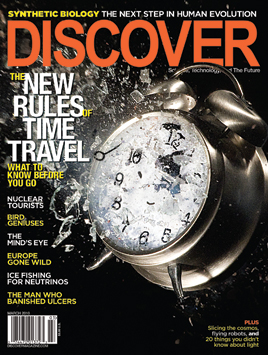 When Discover’s creative team found out that the March 2010 cover story would focus on time travel, they almost immediately knew what they wanted to do. “We’ve been looking for an excuse to blow something up for a long time,” says photo editor Rebecca Horne. “The best way for us to illustrate time travel was to literally show time exploding.”

“We tried a stop watch first, but it got obliterated,” Di Ioia says. “So we decided to go with an alarm clock because once it was blown up, it still had enough identifying elements left so that you could still tell what it was.”

After the initial test was complete, the creative team went to the studio to watch the actual shoot, which lasted about a day. A small shelter space surrounded in Plexiglas was created so that the team could be in the room while the explosion took place. Even though they were protected, Horne says she still went home with a few pieces of clock “shrapnel” in her hair.

A high-res, stop-motion video camera captured the images instead of a regular digital camera. Back at the office, Horne and the team reviewed the video and wrote down the frames they wanted. Maruyama’s team then returned those freeze frames in a digital format.

“We did have to go back and delete pieces of putty that came into the shot, while we darkened other pieces,” Di Ioia says. “Also, a large chunk of glass had to be deleted from the shot or it would have covered the ‘D’ in Discover. And we didn’t want the clock to seem too flat, so we did a good amount of color correction to add some depth.”

Additional images of the clock explosion were used in the Editor’s Note so that readers could view the progression of the explosion from beginning to end.

The exploding alarm clock imagery is not bad in itself, but the headline refers conceptually to something else. Image-wise, the composition feels forced towards the top of the page and technically the bar above the clock would go behind the tagline while the shattering glass would be coming out of the frame in front of the nameplate. With the poorly kerned and oddly centered main headline paired with all-cap secondary lines, it feels more like a trade publication for clockmakers than a smart science brand. The same set of elements could have yielded dramatic impact by simply zooming in on the image, increasing the main headline size—and title casing the subheads.


The exploding clock might not be a 100-percent original idea, but this one is especially well rendered. The cover has tremendous impact, which is the first thing you need. Every inch of the design has been thought out and the 11 cover lines never seem to compete. The choice of up-to-date typography adds to the cool factor. That’s another important element because, unlike a slew of established titles that find it impossible to shed their fuddy-duddy images, Discover means to appeal to a younger audience. Most covers suffer with black backgrounds, but not Discover. Is the main headline misleading? The real story is more about new time travel theories than about actual time travel.