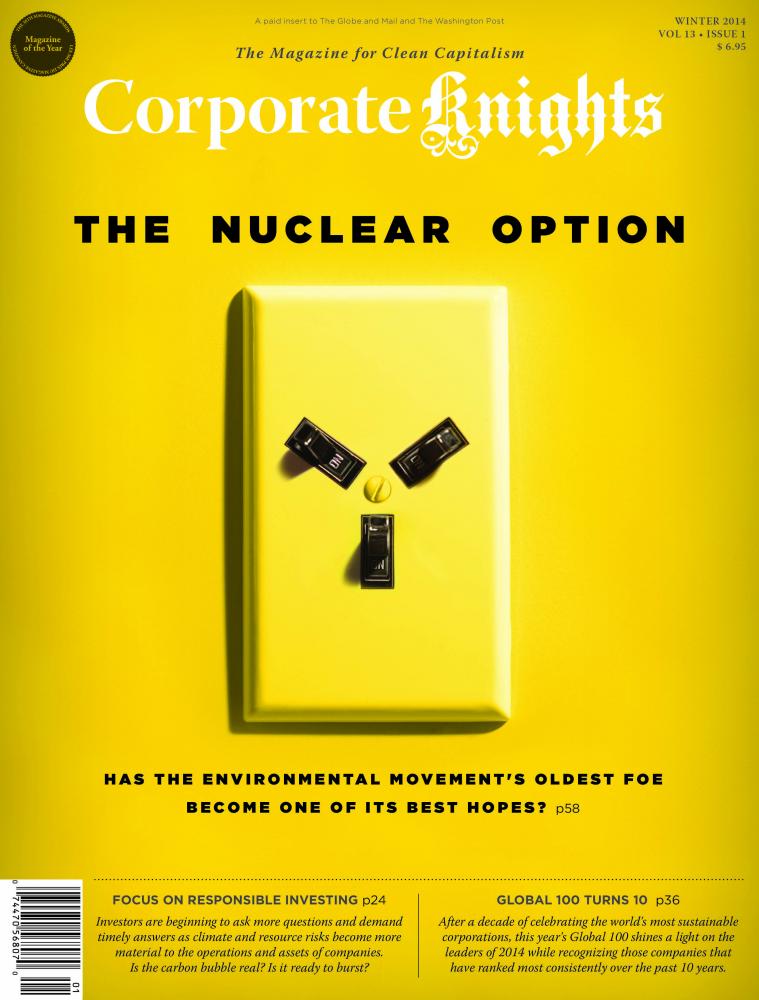 Corporate Knights is a business publication dedicated to promoting the benefits of "clean capitalism " through research and enterprise journalism. Each quarter the magazine aims to deliver arresting imagery on its cover to reflect a package theme.

To do that, Corporate Knights has relied on illustrations, but that trend is changing. And its winter 2014 issue is powerful evidence.

"Our previous cover [Fall 2013] was our first photo cover, featuring Woody Harrelson," says creative director Jack Dylan. "That inspired us to go in a different direction."

Nuclear energy is a polarizing topic, but one Dylan says is timely and relevant. He suggests there were a lot of directions he could have taken given the amount of semiotic iconography associated with nuclear. But instead of looking for a layup, Dylan wanted to take it in a new direction.

Still, the light switch idea was not Dylan’s first choice, nor was it everyone else’s. Nevertheless, he says once he thought of it and mocked it up he was "sold on it."

Although Corporate Knights is not a newsstand publication, Dylan wanted to develop a cover with the same type of impact that compels people to dive in.

"I wanted to make an emotional argument," he says. "I wanted it to be foreboding and give the feeling that turning on the switch is a scary moment."

The image itself was shot by ISTOICA, with Hanna Puley styling the light switch prop. To get the best results they painted the switch yellow, making it easier to render in post-production.

Dylan admits that minor tweaks were necessary to get it just right. "It wasn’t fully reading as ‘nuclear,’" he says. "In the original mock-up all the switches were connected but our photographer figured out to put the screw back in the middle."

I’ve never heard of or seen this publication before. So it is even more refreshing to say, "Wow, what a cool cover." It’s immediate and eyecatching, which is something I always love in a cover.

My only criticism is with the small subheads at the bottom and their acreage of explanatory text. Are they really necessary? Two lines would be good enough. While cover language is essential, minimizing the amount usually strengthens the message being conveyed and makes for a stronger design.

This is a great concept. The idea of using a simple on-off switch plate to make nuclear power feel friendly, accessible and simple is great. Black and white are powerful, simple and clean color options all the way around. The cover makes a very clear statement.

One criticism is that it took me a minute to see that the switches were on-off switches. I Feel as though those tiny letters are so much a part of the visual cue for "light switch" that they should be just a bit clearer.

One more tidbit, the copy at the bottom is just way too much text for a cover. I want to simply be enticed into the issue by cover language, not learn the whole gist.