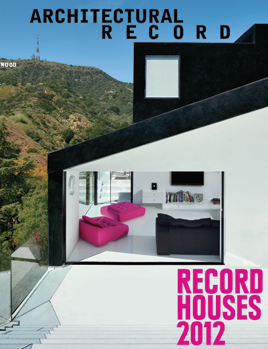 While there may be a few exceptions, magenta is not a color typically seen on the cover of a b-to-b magazine. However, Architectural Record’s April issue takes full advantage of the unexpected hue.

“Since we are not mainly a newsstand publication, we don’t need cover lines that sell the magazines,” says art director Helene Silverman. “The one cover line is all we need on this special issue, and right away I thought it would be a fun counter-intuitive move to echo the magenta, rather than let it remain the only bold color hit.”

The issue Silverman refers to is Architectural Record’s annual Houses issue. AR’s main focus is commercial buildings. She says AR (which won the 2012 Grand Neal Award from American Business Media) does not often shoot its own covers, and this particular image sparked internal debate whether to include it or not, due to the “rougher” composition of the submitted photo.

Silverman says the positives of the shot eventually outweighed the weaker points, “This photo had a lot going for it in terms of the starkness of the building—the crisp black and white of it with the hit of that magenta furniture, in opposition to the rough un-manicured California hillside. The Hollywood sign peeking out at the edge didn’t hurt, either.”

The cover font, which Silverman describes as “bland industrial,” is used in-book as well. “As for headline placement, I wanted to both intensify the awkward cut-off composition, and also push it out of the way of the content of the photo,” she says.

“What the crop on the photo of this modern house has going for it is the dynamic interplay of those positive/negative, nature/building shapes and bringing the eye right inside the oversized patio door. What the crop has working against it is the orphaned bit of the Hollywood sign. This awkward crop seems sloppy and also a bit forced—let the architecture stand on its own and let a caption (small on the cover or to keep it clean on the table of contents) give us the location.

I wonder about the styling choice of what looks like a closed shade on the upper floor window, seems a bit contrived and dulls the glass. Everything else is pitch perfect.”

“The hoary old joke at art school is that good art should not match the couch. So I suppose we can award irony points to this cover. Intentional, I hope. Please? In the long tradition of nearly unreadable AR cover headlines, this one is at least clear of clutter or buzzing moiré background texture, and nicely under control. So no complaints there. But a cover image for houses of the year might want to be a stunning, or crazily, boldly out there piece of architecture, no?

I’m afraid that the only thing I’ll remember from this cover is pink and black—poodle skirts, Elvis, Grease. The good thing is, I will remember it.”