Examining The Atlantic and The New Republic Redesigns
Extending a design across platforms.

Several years ago the American Society of Magazine Editors held a panel discussion that talked about the role of design and art direction in magazines. The general consensus was that it was important, but not essential. The evening ended with one of the participants rattling off a list of magazines that were considered great (and at the time, successful), but that basically looked bad.

It’s doubtful you could have that discussion today. Case in point: The Atlantic and The New Republic, two traditional, text-heavy magazines not historically known for strong visual identities, recently hired young creative director stars, with extensive consumer magazine experience, who have redesigned and visually energized both publications.

For past redesigns, both magazines hired outside design studios to revamp their looks, then handed them over to in-house art directors who were given limited scope in what they could accomplish visually. Not anymore. The Atlantic and New Republic redesigns were both done by their new creative directors, and the magazines’ visually-savvy editors have given them the directive to make the visuals and the design an integral part of the brand across multiple platforms.

Darhil Crooks is the new creative director at The Atlantic, hired in August after crafting a masterful redesign at Ebony. Crooks has extensive experience at consumer magazines like Esquire, and he’s brought that sensibility to his work at The Atlantic.

Meanwhile, The New Republic reached out to Dirk Barnett, the former creative director at Newsweek, who has a lengthy pedigree with Maxim, Blender, The New York Times’s Key and Play magazines, Premiere, and more. Working out of the New York office of the DC-based biweekly, Barnett helmed February’s complete visual transformation, changing everything from the logo to the paper stock.

Previous New Republic art directors Joseph Heroun and Christine Car produced some memorable covers and brought some strong illustration into the magazine over the past decade, but it always felt like they lacked the commitment from the editors to extend their talents to the magazine’s overall design and format.

From 2000-05, when The Atlantic was based in Boston, that magazine’s art director Mary Parsons (now at The American Prospect) helped build its reputation as a home for powerful, well-crafted illustration. A redesign by Michael Beirut and Pentagram in 2008 brought some much-needed modernizing and impact to the magazine’s design, but it never felt fully realized and executed after the initial excitement of the new look wore off.

Enter Crooks and Barnett, who with the support of smart, forward-looking editors (James Bennet at The Atlantic, new owner Chris Hughes and editor Franklin Foer at The New Republic) have brought new visual visions to their magazines that are crisp, energetic, holistic, and very 21st Century. 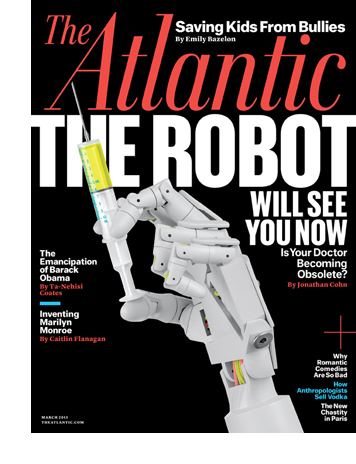 For The Atlantic redesign, Crooks tweaked the logo and inside typography, and added and revamped a number of columns and departments. There are new, visually-driven sections: By Design, a design solution column, and Chartist, “an infographic explanation of a seemingly complicated problem.”

The Atlantic’s new look is bright, engaging, modern, and very accessible. There are lots of graphic points of entry, elegant use of typography, rules, and white space, and smart illustrations. Most importantly, it’s all highly readable; there’s no doubt, even with the heightened design, that the text and imagery are given primacy.

The new design of The Atlantic references consumer magazines like Rolling Stone and Esquire, and Crooks readily acknowledges the influence. “Both those magazines cover such a range of topics and visual approaches, and it all seems to work together. They are also examples of magazines that are able to take complicated, serious topics and make them visually entertaining.”

Crooks also reworked and reintroduced the The Atlantic’s Poseidon colophon, which was something he resurrected from earlier issues of the magazine. He describes it as “A new sexy god of the sea for the social media age.” (For those not familiar with the term, a colophon is an old-school term for a logo, or what used to be called a “printer’s mark,” that would appear on the title page or contents of a book or magazine.)

“What makes The Atlantic great is the writing and the ideas,” say Crooks. “I’ve tried to make the art as visually interesting as the text it illustrates, and the design to keep the readers in the story and turning the pages. It’s something most magazines do, but it’s a new approach for The Atlantic. My goal is to make each issue a unique experience.”

Crooks has just begun to apply the new look of The Atlantic to the magazine’s other platforms. He’s working on digital projects for the websites, and of course, the iPad app. The print redesign debuted with The Atlantic’s March 2013 issue, which is out now.

A Dual Challenge at TNR

Over at The New Republic, Dirk Barnett had a dual challenge. Not only did he need to completely overhaul the magazine’s look, but he had to do it with a format that accommodated a bi-weekly production schedule and a small staff. (The New Republic comes out 20 times a year—twice as often as The Atlantic.)

“The New Republic has never had a creative director in its entire 99-year history,” explains Barnett, “so it’s exciting to have this opportunity to bring a strong visual language to the brand. Frank Foer and Chris Hughes understand that smart design equals great business. Chris started Facebook, and that has one of the most iconic design voices in recent history. Our focus right now is building up a memorable brand experience.”

Most notable of the changes to the magazine is the heavier cover stock and inside paper (not to mention a liberal use of metallic ink). Gone is the dry, dutiful old feel of The New Republic, replaced with a look that is contemporary, engaging, and sometimes even fun.

The design is modern and digital-feeling, and the new logo is bold, built to work well across platforms large and small. 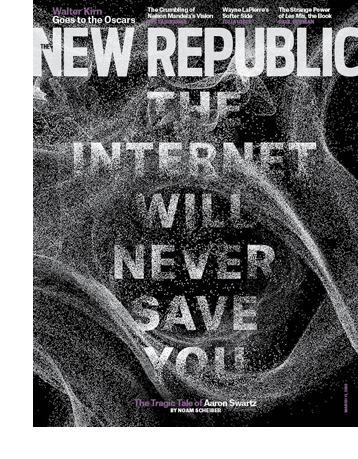 Barnett mixes this very contemporary design style with analog imagery, like the calligraphy for The Mall section opener, and many illustrations with a hand-drawn feel. He’s added white space, texture, and variety to the front of the book. There are nods to some of the things that Bloomberg Businessweek has done so well, most notably on a recent double-page chart devoted to Charles Schumer, with what seems like hundreds of little black and white headshots. The senior U.S. Senator from New York has never looked cooler, or more interesting.

Barnett explains the new design: “The New Republic has extremely rich, smart content, and our overall goal was to meet that with very smart design and art direction. We are just trying to have some fun, and do some great work when we can.”

The New Republic’s back section is highly formatted to deal with accelerated publishing deadlines (Barnett points out that this section closes before the rest of the magazine). The section begins with a splash page that features a beautiful full-page illustration of an ampersand, done with a handcrafted feel, in the way that The New York Times’s T magazine used to open its feature well each month with a variation of the distinctive black letter T. Many of the back-of-book pages are full text with no entry points; it’s a testimony to the strength and elegance of Barnett’s new design that even those pages look graceful and inviting.

The feature design is much more freeform and expansive, a place where graphic statements are being made. The almost all-white two-page spread opener of the cover story in the February 25 issue (the second of the redesign) features a giant two-word headline (“Original Sin”), a very short subhead and byline, and no image. Through pull quotes, sidebars, timelines, and photos, Barnett moves the reader through the features, even the very text-heavy ones, with expert precision.

There’s a new approach to the cover design, too. In the past The New Republic covers have been strongly illustration-based. But the first three issues of the new look featured a powerful, intimate portrait of Barack Obama by photographer Chris Buck, an all-white homage to The Beatles White Album LP (“The Republicans”), and a gorgeous, futuristic type treatment by typographic illustrator Sean Freeman.

Like Crooks at The Atlantic, Barnett has redesigned and reintroduced a colophon to The New Republic. The magazine’s classic sailing ship logo has been brought up to date and appears as an accent throughout the magazine. I sense a battle of the magazine colophons in the near future, or perhaps a new category in the publication design competitions.

The New Republic website redesign was done by Hard Candy Shell, with some input from Barnett (he calls their work “inspiring”). But moving forward, he’s got his hands on the entire brand: “The four of us in the art department really operate as an in-house design studio. We design the magazine, the tablet, maintain the look and design of the website, the signage and collateral for our events, etc.”

According to Barnett, the design of the iPad version of the magazine heavily influenced the print edition: “We kept asking, ‘How will this look on the tablet?’, and many of the design elements we cooked up were driven by the answer to that question.”

That’s something I found to be true when I was working at Reader’s Digest: the iPad app oftentimes informs the print edition, both in design and in the general way that the magazine is put together. The Atlantic and The New Republic have both made smart moves by hiring creative directors who not only have been able to completely overhaul their respective magazine’s visual identity, but who also understand the new nature of graphic branding, and who can extend those new visual identities across multiple platforms in an exciting way.