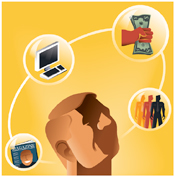 If there is one area suffering almost as much as print, it’s events. While trade show revenue dropped 3.5 percent in 2008, it fell a whopping 20.1 percent through the first quarter of 2009, according to American Business Media. Reed Exhibitions (which operates independently of Reed Business Information), saw revenue and adjusted operating profits plunge 22 percent and 26 percent  respectively in the first half of the year.

Nielsen Business Media vp of business development Eric Biener says events haven’t fallen as much as print but when they do, it hurts more. “Even small declines have a huge impact on our infrastructure,” he adds.

“The real bad news is that the business in 2010 will take further hits in both exhibit space and attendance, and we’re budgeting accordingly—almost all of the big shows will suffer double digit declines in revenue and earnings,” he adds. “This will be the first time our shows have declined in a meaningful and painful way.”

Part of the problem for b-to-b publishers is that 2009 budgets were set with 2008 expectations. “Going into 2009 we didn’t know what to expect and what we budgeted wasn’t the reality of the market,” says Karl Vontz, director of events for Nielsen’s Adweek Media and CLIO Awards. “We thought we could still grow. Not only did we not grow, it went backwards.”

Many publishers are adapting their events to new market realities. Nielsen is changing the format of some shows to smaller, more targeted events, such as Social Media Strategies, which focused on using Facebook, LinkedIn, and Twitter for marketing. “People don’t know how to use these channels yet, and we wound up with standing-room only,” says Vontz, who adds that Nielsen expected 180 people but got 210.

For the CLIO Awards, which recognize the best in television commercials, Nielsen is doing a cocktail reception rather than a multi-day conference and multi-hour awards show. It expects 400 attendees. “People get to eat and network and have fun and not get stuck in a three-hour awards show that’s a big yawn,” says Vontz. 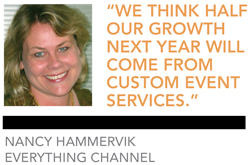 Vontz thinks Nielsen has adapted for 2010. “We’re being conservative with numbers and we’re not expecting existing events to grow,” he says. “We’re adding new events for revenue growth. We’re going into 2010 feeling like we can manage this without being in this panic of ‘cut-cut-cut.’ We’re not anticipating the economy to start recovering but if it does, it’s a bonus for us.”

United Business Media’s Everything Channel is having to rethink its approach as well. “Based on the way people got squeezed this year, marketers are going into 2010 with compromised budgets,” says Nancy Hammervik, senior vice president and managing director of Everything Channel Events. “One of the positive outcomes of a challenging market is that it causes you to think smarter. You get as tight as you can while evaluating everything you do.”

Hammervik says publishers can’t expect to grow by existing clients spending more. “Vendors are still coming but they’re spending less money and starting to understand how to work an event where they don’t take advantage of every sponsorship opportunity but just work harder to meet everybody. Our August XChange event is our largest—and was up in the number of vendors but down in the amount of spending.”

Still, Hammervik thinks her group outperformed most b-to-b events thanks to its hosted model, in which the publisher qualifies a very specific audience and guarantees deliverability by flying out buyers to meet with vendors. “The conferences are smaller but they deliver higher ROI.”

Both Vontz and Hammervik are looking to new events and repackaging of existing events for revenue growth next year. That includes assessing which legacy events have run their course. “That’s something we’ve never really had to do before,” says Hammervik.

For Hammervik, even the hosted model that continued to perform in 2009 is being scaled back in favor of events that can produce larger margins.

“The thing about hosted models is they don’t scale,” she adds. “The bigger they get, the more they cost. The way you grow is to do more—we went from six events to 24. The margin for hosted events is typically half your revenue. At first that sounds great: if you do a $2 million event, you make $1 million. But if you have a $500,000 event, it’s $250,000 to just recruit and host.”

Now, Hammervik wants to keep the hosted model where appropriate but focus on gearing up for larger events with larger profit margins. “If we cut back on hosted events we can allow people to focus on bigger events that drive margins. My strategy for next year is if we can roll smaller events into bigger events, and every dollar hits the bottom line, anything we sell in will go to the bottom line.”

Everything Channel is rolling out a series of regional events around the emerging category of “cloud computing.” ”We did something similar five years ago with managed services—people didn’t really understand what it was about and we responded with road shows,” Hammervik says. “We’re rolling out at least six one-day regional events. We’re being more cautious about not doing three-day events. That makes it easier for attendees and vendors to manage.”

Everything Channel has had a standalone channel for the Latin American community and did hosted events that put buyers and sellers together in Miami. “It’s been five years, it matches the budgets vendors will spend on second or third tier emerging markets, but it requires a lot of energy and resources without offering a lot of return on margin,” says Hammervik

Everything Channel will fold its XChange Latin America into XChange Americas, which will also include a separate track for Canadian buyers and sellers.

The publisher is taking a similar approach with its Project & Portfolio Management event which it will fold into a larger mid-market event. “This is a very high-end, focused software event but the opportunity is waning,” says Hammervik. “Most enterprise companies now have a significant enterprise software system. We spend a disproportionate time of energy on recruiting and selling for that event. Additional events, including two retail technology shows, will be rolled into other channel events.

Folding four events—two retail XChanges, the Latin America XChange and PPM—into other events will save Everything Channel almost $4 million in expenses next year, according to Hammervik.

Still, she recognizes that saving on expenses doesn’t equal generating revenue. “We all realize that with co-locating events, one plus one plus one will never equal three,” Hammervik adds. “Vendors won’t spend what they did at an individual event. If we combine XChange Latin America with the U.S. event, it may equal one and a half out of two. We’ll lose 50 percent on revenue, but we’re saving significantly on expenses.”

Hammervik is forecasting a 10 percent increase in revenue for her group in 2010, driven by new standalone events but also a new series of custom event services. “We have been doing that on the side but we’re making a significant investment next year in staff and marketing to try to make it a big business.”

While marketers have increasingly taken on publishing duties for themselves—including events, Webinars, even magazines—Hammervik sees an opportunity for publishers to win that business back. “Vendors themselves have lost headcount and resources. Their core competency is making and selling technology, not doing events. We think half our growth next year will come from custom event services.”

Everything Channel is also moving aggressively into offering Web services around live events as both a preview and community-builder. “A month before the live event, the virtual event will be active,” Hammervik says. “Sponsors can pre-qualify attendees and schedule live meetings with prospects.”

Hammervik is looking at charging an additional $5,000-$10,000 to add virtual components to live event sponsorships. “If we have 100 vendors, that will be a significant revenue stream,” she says.