ESPN The Magazine Wins Magazine of the Year at the Eddie & Ozzie Awards Gala
Four magazine publishing professionals were inducted into the Hall of Fame and over 200 awards were presented. 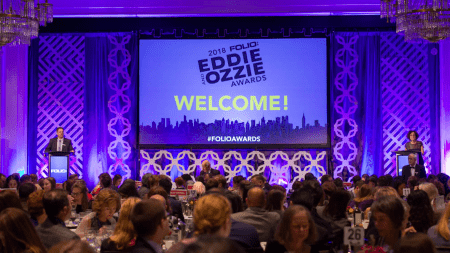 NEW YORK – ESPN The Magazine took home Folio:’s first-ever Magazine of the Year Award. The magazine was selected for it’s consistent coverage of stories and controversies that transcend the sports industry and relate to a much broader audience, as well as for its graphic covers and designs.

“We think deeply and broadly about how sports matters in today’s world,” said editor-in-chief of the Magazine of the Year, Alison Overholt, who attributed the win to her close knit team. “We think that people can come to sports and through that lens can learn about so many things in the world and that’s one of the things that still brings people together these days.”

Nearly 350 industry professionals gathered in the Trianon Ballroom at the New York Hilton Midtown to celebrate the Eddie & Ozzie Awards for excellence in editorial and design. Brands from all across the publishing space submitted over 2,000 entries, competing to take home the gold across 200+ categories.

Some of the other big winners of the night were Ellen Carpenter, editor-in-chief of Hemispheres Magazine, Rhapsody Magazine and The Hemispheres Travel Show, who took home the award for Editor of the Year, and Mary Watson, senior designer at b.inspired, who earned the title of Designer of the Year. And multi-winning publishers include Inside Salk, who earned five wins, Travel Weekly, who earned six wins, and AARP, who took home six awards between AARP Bulletin and AARP The Magazine.

Four longtime editors and designers were inducted into the Editorial & Design Hall of Fame, which was carried over to Folio: this year from min. The 2018 inductees include longtime editor-in-chief of Yankee Magazine, Mel Allen, ESPN’s creative director, Chin Wang, editor-in-chief of Meredith’s Parents Network, Liz Vaccariello, and senior art director of IEEE Spectrum, Mark Montgomery.

Vaccariello said in her induction speech, “I’m proud to be a part of a company that has proven it’s commitment to print,” carrying over a theme of love for the platform from the What’s the Future of Print session that she spoke in earlier in the Show.

Jamie Trowbridge, president and CEO of Yankee Publishing, introduced Mel Allen and said that while Allen has been with the publisher for 39 years and has been the editor for 12 years, “you don’t get inducted simply for enduring. Mel deserves this award because he’s a writer and editor of great depth, integrity, emotional range, and of course, experience.”

In his acceptance speech, Allen recalled one anecdote about a woman who felt compelled to write to him about a story that resonated with her and he said, “For me, this honor is for everyone who lives for those moments where we can make someone feel so deeply about what we do, that they want us to know.”

“[ESPN] is a truly special place. It’s where I have voice, where I have influence, and as a working woman right now, I have to tell you how rare that is,” said Wang in her acceptance speech. “And I really, truly believe that I’m going to end my career at ESPN.”

And the last Hall of Fame honoree was Mark Montgomery, the senior art director of IEEE Spectrum, who said that “The one thing that’s been constant in all of these years of publishing and what’s really kept my heart into is, it’s really people.”

Congratulations to all of the Eddie & Ozzie winners and to our Hall of Fame inductees! You can see the full list of winners and award honorees here.

We will be cheering a very long time for this tremendous honor. Thank you @foliomag for naming us Magazine of the Year. I pinch myself daily that I get to work with this team. They truly are the best team in the business. ❤️??#FolioAwards pic.twitter.com/cjXOVRr7fZ

So this is kinda fun. Last night I was incredibly honored to be inducted into the @folio_mag editorial and design Hall of Fame (don’t put me out to pasture yet though! ?). I had a few minutes to speak, and I thanked these 3 Steves in my life — Left: my @meredithcorporation partner in crime and content @bhg Editor in Chief @steporr. Right: my @parents publisher until he left us last week for a big-shot job in the @meredithcorporation executive suite @sbgrune. Front and center: the most important Steve of all, my partner in everything, husband @stevevacc, who even wore a jacket for the occasion! ?HUGE NIGHT FOR MEREDITH —a dozen plus awards for many of our titles. See my story for all ⬆️. ???????