ESPN to Launch Annual Fishing Magazine
Saltwater to be sent to 250,000 subscribers of Bassmaster. 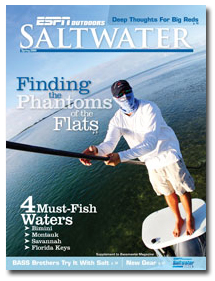 ESPN Outdoors
announced this week that it will launch ESPN Outdoors Saltwater
magazine this April.

The annual title will be distributed to more than 250,000 subscribers of Bassmaster magazine, making it the
highest circulated saltwater fishing publication in the U.S., according
to the Mediamark Research & Intelligence (MRI)  Fall 2008 Report.

A free,
digital copy of the magazine is available on the ESPN Web site.

“We have had tremendous support and response from the saltwater
fishing manufacturers,” James Hall, editor, ESPN Outdoors
publications, said in a statement,