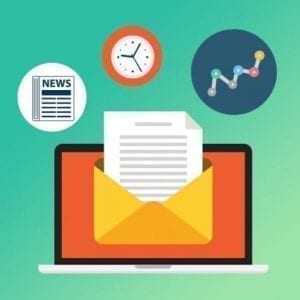 Offering publishers direct relationships with their readers, on their own terms, email newsletters remain as vital as ever in the platform age. But a relatively old tool can still be adapted to new purposes, and concurrent with the rise of the self-contained, narrative newsletter, publishers are increasingly viewing email as more than just an engine for driving traffic to their sites.

“Newsletters today are in many ways the newspapers of yesterday; the inbox is the new doorstep,” says Jessie Li, newsletter editor at The New Yorker. “In recent years we’ve seen a huge explosion of newsletters in the news industry, and the intimacy in particular of written-through newsletters, with dedicated authors and sometimes niche audiences, has definitely pushed The New Yorker’s newsletters into new territory too.”

Still, Li says, the magazine has continued to find success with simpler, more traditional formats—link drivers or article roundups—that can function as a less cluttered, more curated version of a homepage for readers.

Like anything else, the audience dictates the format. At Industry Dive, a B2B media company which makes extensive use of email newsletters across its 20 industry-specific verticals, the succinct, mobile-optimized, headline-and-brief-summary format remains ideal, says VP of marketing Robin Re, but frequencies and send times can vary significantly from vertical to vertical, depending on each specific audience’s consumption habits, and frequent testing and experimentation is the norm.

“Everyone talks about the narrative format being the future of newsletters, but there is still a home for the headline-and-brief-summary when you have an audience of busy executives whose inboxes are their morning paper-thumb,” says Re.

Like The New Yorker, for about the past two years, New York magazine has been evolving its newsletter operation from a series of straightforward set of “traffic-oriented daily digests,” to more than a dozen regular newsletters of various frequencies, formats and purposes, says deputy editor Kaitlin Jessing-Butz.

Originally reserved for its offshoot verticals, such as The Cut, The Strategist and Vulture, it wasn’t until last September that the magazine debuted its first purely New York-branded newsletter, “One Great Story,” which hits inboxes in the early evenings, Monday through Friday.

“I’ve been working with editors from the various verticals to figure out the best way to beef up their offerings,” Jessing-Butz tells Folio:. “It’s very much different by vertical. For some of them, the best bet is to create a more curated and robust daily newsletter. For others, it’s more fruitful to put energy into starting topic-based newsletters that go out less frequently.”

An excerpt from the weekly newsletter, “The New Yorker Recommends.”

A more robust email operation requires a more nuanced strategy, and defining success in email is no longer a matter of monitoring open and click rates. Though these metrics certainly remain important as indicators of a healthy newsletter, Li says, “they don’t paint the full picture.”

“I also look at things like list growth, especially for recently launched newsletters,” she adds, “Each newsletter has a specific goal and responsibility. So beyond numbers, the strategy for each of them varies, and so does evaluating the success of each newsletter.”

At Industry Dive, Re says her teams look at everything from opens and clicks to time of open, clicks on multiple links, opt-outs and shares.

“There is no magic metric that can grade the health or success of your email newsletter in just one view,” Re says, adding that when it comes to analytics, the “who” behind the numbers is just as important as the numbers themselves.

“For us, it’s all about the people opening, reading and engaging with our newsletter content, because we serve specific audiences and markets,” she continues. “We need to know our content strategy is meeting the needs of our target readers.”

For more narrative-formatted newsletters, where engagement is inherently less quantifiable, one thing The New Yorker relies on is direct feedback from subscribers.

“Newsletters are like a social media platform that publishers themselves can truly own as a consistent source of readership and engagement—and encouraging responses can be a way to show readers that you care about them and listen to their feedback,” Li says.

Even for a newsletter whose primary purpose is not to drive clicks, New York has ways of monitoring engagement in the absence of granular data, including watching the click rates on standard buttons, often embedded two or three sections down. While these metrics may represent only a fraction of the number of subscribers who actually read to the bottom of a particular newsletter, it’s a sign of healthy engagement if they remain steady on an issue-by-issue basis, Jessing-Butz says.

“The biggest red flag would be a marked uptick in unsubscribes,” she adds. “Open rate would probably be second. Even for more click-heavy newsletters, obviously we want to see clicks, but if people are consistently opening, that’s promising to me.”

Generally speaking, Li says The New Yorker has found success with two formats when it comes to subject lines, Li says. One is the explainer-style—”How the Pandemic Has Shattered the Myth of College in America,” or “How Anthony Fauci Became America’s Doctor“—while another format teases multiple stories with a few words each: “‘Fran Lebowitz Is the Patron Saint of Staying at Home — Jia Tolentino Does Zoom Yoga — Tiger King.”

“Regardless of the format, obviously there are character cutoffs with different email clients, so you want the first three to five words to really shine,” Li says.

Re points to nine pieces of advice the audience development team at Industry Dive came up with for conceiving subject lines that will generate opens, among them: focus on eliminating superfluous clutter rather than adhering to rigid character-count limits; use numbers to highlight interesting statistics within the content; and call out brands, names or institutions featured in the editorial content within the first few words of the subject line. 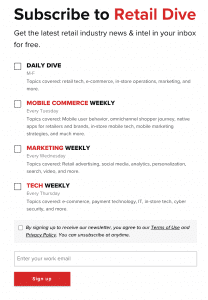 Setting the Frequency and Time of Day

Re says Industry Dive takes a flexible approach to scheduling its headline-focused e-letters, allowing each vertical’s industry-specific news cycle influence the frequency, with some scaling up to daily sends if there are constant new developments. Others, like topic-specific deep dives or “most read” article roundups adhere to regular weekly schedules.

Both Re and Li said they frequently experiment with different send times for newsletters, as these are fairly straightforward to A/B tests to execute but yield useful insights—Industry Dive learned through testing that the best times of day for newsletter engagement can vary across all of its 20 different markets, Re says, depending on the audience.

For example, “folks in higher education prefer to get their newsletter first thing in the morning—maybe even waiting for them in their inbox when they wake up. Others look to receive our insights after a few cups of coffee.”

With a few exceptions, Li says The New Yorker‘s newsletters mostly come out either daily once per week. The flagship newsletter, “The Daily,” is timed to coincide with subscribers’ lunch breaks, deploying late in the morning or the early afternoon, whereas “Daily Humor” is a better fit for the end of the work day.

Weekly products, like “The Sunday Archive” or “This Week’s Issue,” arrive on Sunday mornings and Monday evenings, respectively, when readers have time for longer, more in-depth features.

“Fatigue can be a concern, especially for readers who subscribe to several of our newsletters,” Li adds, “so we make sure to vary our send times and our content to reflect the character and approach of each newsletter.”

Jessing-Butz says the subscriber lists for New York‘s newsletters have a significant amount of overlap. Given that most of them go out between 2:00 and 5:30 p.m., preventing subscribers from being hit with too many emails in too short a period of time poses some workflow challenges, but it’s still worth a concerted effort to keep things spaced reasonably apart. 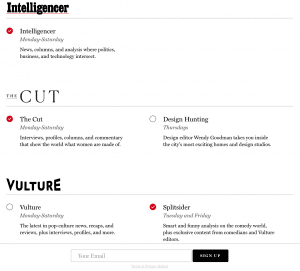 This balancing act becomes all the more complicated when publishers factor in the inherent value of email as a marketing channel. Jessing-Butz says New York has some ground rules in place when it comes to making sure subscribers aren’t bombarded with promotional messaging. If someone is only signed up for a single monthly newsletter, for example, they won’t receive any marketing communications.

Moreover, she says the audience team at New York is frequently at work developing emails that fulfill a marketing purpose, but are also are content-focused and “generally of interest to devoted readers.”

“It’s really taking a rigorous eye to how we use email for all purposes, and making sure no one who wants editorial content and news and storytelling is feeling like that’s not the primary thing they’re getting,” she says.

The push and pull between editorial and marketing also manifests itself in the sign-up stage, where the need to facilitate a quick and easy process isn’t always aligned with the desire to collect valuable demographic information on subscribers.

“We are pretty limited in how much data we capture at sign up. That’s a trade-off we’ve accepted for now,” Jessing-Butz says. “We don’t want people to not sign up because they have to give us a ton of information.”

Sometimes, it’s also a matter of delayed gratification. As an easy-to-digest showcase of the best the magazine has to offer, newsletters at both New York and The New Yorker have proven to be a highly effective way of converting casual visitors to paying subscribers.

“When someone becomes a paid subscriber, we do know more about them, and that’s more valuable for our marketing and analytics teams,” she adds.