Salaries for editorial directors and editors-in-chief were mixed for those in b-to-b, consumer and association publishing. Business and consumer editors each saw their salaries dip for the third time in four years, while association ED/EICs got their fifth pay raise in a row. Associations remain the highest-paid segment for this position in the industry.

Geography also continued to be a primary factor in salary with the difference between the highest-paying (Northeast; $105,300) and lowest-paying (West; $73,200) regions staying flat at around $32,000. On a more granular level, the gap shrunk for those working in and out of the New York City area however.

Experience—in publishing, at a specific company and in a specific position—seemed to be less valuable than it has been in the past. Salaries fell off for both longest- and shortest-tenured editors, suggesting that experienced, high earners may be getting replaced by inexperienced, low-cost alternatives. 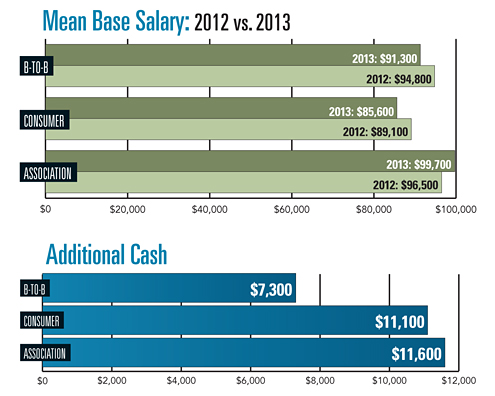