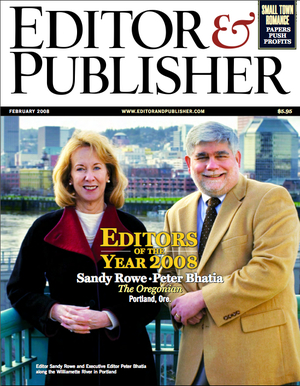 Editor & Publisher has received a lifeline—from a boating magazine publisher.

Two weeks after being shuttered by Nielsen Business Media, the nearly 130-year-old newspaper industry magazine was acquired Thursday by Irvine, California-based Duncan McIntosh Co. Inc. The February issue will be its first under new ownership.

"Such a critical information source for a newspaper industry so desperately in need of help should not go away," McIntosh said in the announcement, which was posted to the E&P Web site. "I’ve been a reader of E&P over the course of 30 years and know its incredible value to readers and advertisers."

How exactly E&P will mesh with Duncan McIntosh Co. Inc.’s stable of boating publications, including Boating World, Sea Magazine and The Log newspaper, was not immediately clear. McIntosh did not immediately return an e-mail seeking comment.

E&P’s former editor-at-large, Mark Fitzgerald, will serve as editor under the new ownership. Former editor Greg Mitchell is no longer with the magazine. Charles McKeown will continue as publisher.

Last week, Kirkus Reviews managing editor Eric Liebetrau told FOLIO: that a buyer had stepped forward for that magazine and that more details could be available before the end of the month.