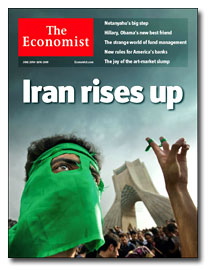 The London-based company, which publishes its namesake magazine, reported approximately $92 million in operating profit, up 26 percent over the previous 12-month period. Revenue was up 17 percent to roughly $514.2 million.

According to CEO Andrew Rashbass, the company continues to deliver value to its clients despite the down economy. “These results demonstrate that great brands delivering real value to readers and advertisers thrive even when the economic cycle turns and when the structure of the industry is evolving in the way information and advertising are consumed and delivered,” he said.

The group reportedly has cut as many as 130 positions, reducing its global workforce to 1,100.

The Economist’s worldwide circulation grew 6.4 percent during the period to 1,390,780, the company said. Ad revenue at Economist.com was up 29 percent while page views were up 53 percent.

The Economist Group also publishes CFO and Roll Call. It was reported last week that the group had acquired Washington D.C.-based Congressional Quarterly, which has been on the block since January.

When contacted by FOLIO:, an Economist Group spokesperson denied the report, calling it “speculation.”