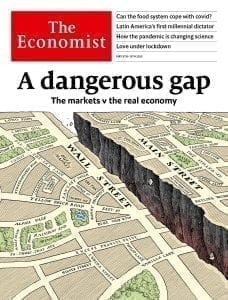 The Economist Group is laying off 90 employees, about 7% of its 1,300 total staffers, the company said Friday, citing the business impact of the COVID-19 pandemic.

The cuts primarily affected employees in events and client solutions roles, as well as TVC, the London-based content marketing agency acquired by The Economist Group in 2012, a company spokeswoman said, adding that the The Economist‘s editorial team was spared from any changes.

Additionally, the company is shifting its bimonthly lifestyle magazine, 1843, to a digital-only product beginning with its August/September issue, a move that it says was already under consideration but accelerated by the pandemic. That development comes about 14 months after 1843 was relaunched for the second time in three years, with a new editor and, notably, a broader set of digital offerings.

Several top executives are taking voluntary salary reductions, including CEO Lara Boro and editor-in-chief Zanny Minton-Beddoes as well as the members of the board, though the company declined to share details on the pay cuts.

“We have made the difficult decision to restructure and reduce roles in the parts of our business most affected by COVID-19,” reads a statement provided to Folio:. “Each one of our departing colleagues has been instrumental in helping us build the business we have today and leaves with our heartfelt thanks and our promise to build on the legacy they leave behind.”

Like many publishers, The Economist Group has seen an impact to its print and digital advertising business during the pandemic, as well as events. The spokeswoman noted that the company will unlikely be able to run any live events until 2021 and is shifting to a virtual event strategy in the interim.