Digital is the priority for most publishers, yet many executives have had to re-adjust their e-media forecasts just as they did with more traditional revenue streams such as print and events. Online ad spending in the U.S. dropped 5 percent to $5.5 billion in the first quarter of 2009 and 7 percent to $6.2 billion in the second quarter, according to market analyst IDC.

Digital revenue remains relatively small, despite massive percentage growth in recent years (and massive slumps in traditional revenue streams). “Those who have been aggressively pursuing digital will likely see it between 8 percent and 15 percent of the overall revenue mix,” Deborah Esayian, co-president of Emmis Interactive told FOLIO: recently. 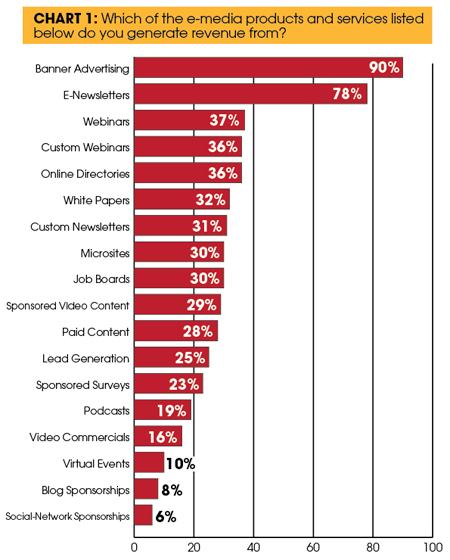 And while many publishers vow they will “never be dependent on print advertising again,” just how well are they following through on that promise? FOLIO:’s 2009 E-Media Survey asks publishers where their biggest e-media successes (and set-backs) are coming from. 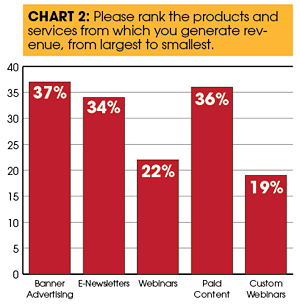 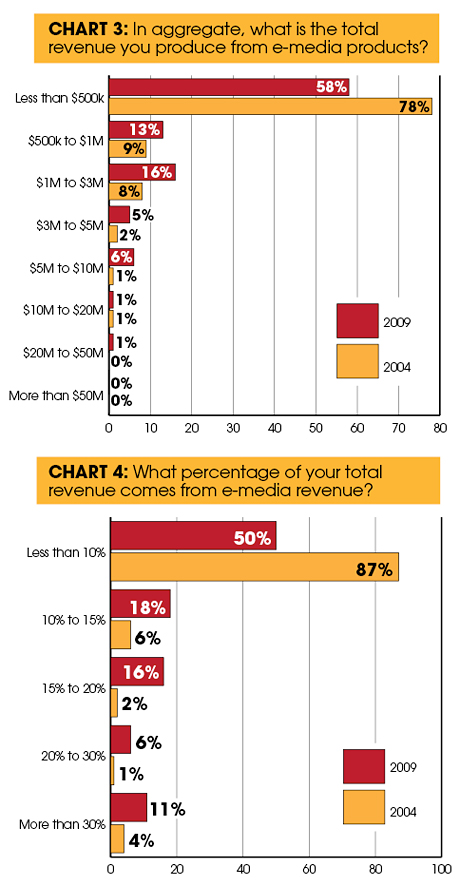 “Saying we’re going to migrate consumers one-to-one, print to online, is naive,” Hearst digital manager Chuck Cordray told FOLIO:. “Customers will choose what they want to do. As publishers, we have to decide if we are going to compete in that media and succeed. Whatever happens in the traditional magazine business, we have to compete in digital as a business.”

Reader’s Digest is attempting to change its perception as a legacy print brand by making SEO, social media and newsletter initiatives a priority. “That’s empowering our growth rather than spending $100 million on a big ad campaign,” says acting general manager Jonathon Hills. 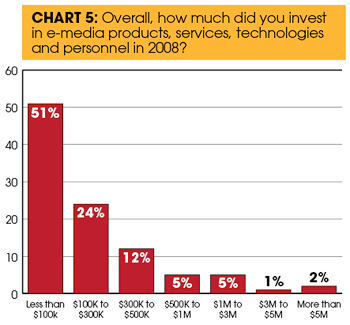 Next up is transforming the Reader’s Digest brand into a multi-platform experience. “We’re focusing on video,” says Hills. “Much of our content is perfectly suited for it, and it’s highly monetizeable. We’ll see action with mobile this year on the iPhone.”

While smaller publishers (those generating $5 million or less per year in total revenue) have historically lagged behind larger publishers when it comes to e-media as an overall percentage, they’re catching up and in many cases surpassing larger publishers (of course, when you’re smaller overall, it’s easier to change the revenue ratio).

As a publisher of five titles tied closely to the new home market in Orange County, California, Churm Media saw 20 percent of its revenue disappear over an 18-month period. As part of its response, Churm devoted $350,000 to Web development, including revamping Web sites and developing an aggressive newsletter strategy. In 2009, Churm expects 10 percent of its total revenue to come from digital. CEO Steve Churm says the company could be at 22 percent in 2010. “A year ago we were at 1 percent,” he says.

Meanwhile, Phoenix Media Network says its online revenue grew by 25 percent last year. Atlantic Media says digital revenue is growing 55 percent in 2009. And while Incisive Media says print makes up 70 percent of its business with events around 15 percent to 20 percent and online at 10 percent to 15 percent, the potential for digital growth is greater, particularly for data and paid content. “We’ve seen the end-user part of the business (data) and even subscriptions grow faster than the advertiser portion,” says CEO William Pollak. 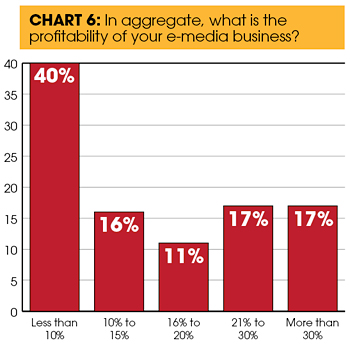 As part of its Chapter 11 filing in August, Cygnus Business Media revealed that it expects interactive revenue to drop 14 percent to $8.6 million in 2009. By 2013, Cygnus forecasts overall revenue will be $75.5 million, with print accounting for 49.6 percent of total revenue, or $37.4 million. Events will account for 26 percent (compared to 15.4 percent of revenue in 2009), while interactive is forecast at $18.4 million or 24.4 percent of total revenue (up from 12.5 percent in 2009). In five years, print will remain the largest revenue stream accounting for nearly half of Cygnus’ total revenue.

Banners Reign in Revenue, Not Profit

While the buzz around mobile and social media dominates much of the digital conversation, banner advertising and e-newsletters remain the most prominent e-media revenue streams with 90 percent and 78 percent of survey respondents saying they derive revenue from these two sources [Chart 1]. Custom Webinars and online directories tied as the third most prominent products, offered by 36 percent of respondents. 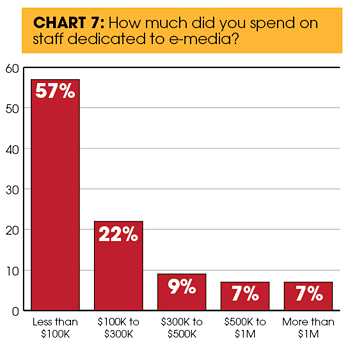 That seems to mirror what online-only publishers are doing as well. Eighty-one percent of traditional publishers say the primary revenue model for their online-only competition is advertising, followed by lead generation and subscriptions. According to a FOLIO: survey earlier this year, 74 percent of publishers said they launched at least one online-only product within the last two years.

Meanwhile, companies such as GlobalSpec represent what publishers could be facing (and how they may want to structure themselves online). Originally positioned as a vertical search engine for the engineering market, GlobalSpec has evolved into a multi-format, multi-product model that includes databases and e-mail newsletters with more than $50 million in estimated revenue. “Our typical customer will spend between $10,000 and upwards of $1 million,” GlobalSpec CEO Jeff Killeen told FOLIO: recently. “We have many hundred thousand dollar-plus relationships.”

VIN (Veterinary Information Network) is another online-only publisher that is neither sponsorship nor advertising-based; it’s membership based, with 42,000 members paying $55 per month.

When compared to the last five years, the outlook indicates steady improvement. Seventy-eight percent of respondents report they generated less than $500,000 in e-media revenue in 2004. Nine percent generated $500,000 to $1 million, while the percentage of respondents generating $1 million to $3 million in revenue doubled over the last five years, from 8 percent to 16 percent. 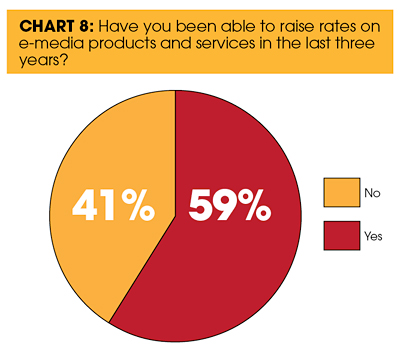 Most See Profit Margins of 10 Percent

Digital Investment: Most Under $100K

While publishers often cite the lower costs and higher margins associated with digital media versus print, building a digital business requires significant investment in hardware, services and personnel. According to FOLIO:’s 2009 B-to-B CEO survey, e-media accounted for the largest operating expense increase among b-to-b publishers in 2008, up 6 percent.

Between open source solutions and existing staff taking on new responsibilities, many publishers are finding they don’t have to break the bank. In August 2006, the Web site for Reni Publishing’s Florida Real Estate Journal averaged 750 monthly unique visitors but after some basic tweaks and a $1,000 software investment, Reni had 50,000 unique visitors by the end of 2007.

Online startup Knitters Review, which sees an average of 2.8 million page views and revenue in the low six figures, says its biggest expense is hosting a forum of 70,000 members, which requires a lot of bandwidth and storage—and costs about 10 percent of Knitters Review’s total revenue.

“We were in a unique position in that our company wanted to do it right and as a startup told me not to worry about revenue the first year; worry about building the product,” says Jeff Higley, editorial director of digital media for HotelNewsNow.com. “For the actual costs of building the site itself, plus the back-end stuff, I would say the startup alone was about 70 percent of what it would have been for a print product from a start-up perspective.”

Staffing: As Silos Break Down, Everyone Works On Digital

In recent years, publishers have found that online staffers could command higher salaries than their equivalent counterparts in print. That’s starting to level out as digital skills become more commonplace (and as the separation between “print” and “digital” staffs crumble and one staff is responsible for everything).

According to the FOLIO: survey, 57 percent of respondents spent less than $100,000 on staff dedicated to e-media (indicating that while many publishers may have a dedicated e-media or newsletter editor, the entire staff is generating content for the Web). Twenty-two percent say they spent between $100,000 to $300,000 on a digital media staff, while 9 percent spent $300,000 to $500,000.

Many publishers have struggled with getting existing staffers to sell digital, since the commissions are typically smaller than print. However, 74 percent of respondents say their staff sells both print and digital, compared to 16 percent that have a dedicated e-media sales staff and 10 percent that outsource their digital sales.

According to the FOLIO: survey, 75 percent of e-media advertisers are existing accounts, while 25 percent are new business. Many have worried that online pricing started so low that publishers would have a hard time raising rates. However, 59 percent of respondents say that they have been able to raise the rates on e-media products.

When it comes to why they’re buying online media, the majority—52 percent—of publishers say their clients cite ROI/measurability and deeper business intelligence as the top reasons. Twenty-five percent of publishers say their clients are turning to e-media for lead generation, while 23 percent say it’s because of an accessible price point. Interestingly, just 5 percent of respondents say their advertisers cite the ability to interact with their audience via digital media.