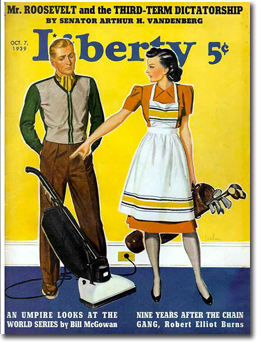 Rebel Magazine hits the iPad with its May/April issue. The free app includes video and audio, and is enhanced for the iPad 3’s retina display.

PASSPORT Magazine is now available for the iPad and other mobile devices, with annual digital subscriptions priced at $14.99. The digital edition includes the magazine’s print content, as well as live links to various hotels, restaurants and other traveling attractions.

REDBOOK goes after social engagement with its Father’s Day Facebook app. Once Facebook users “like” the magazine’s fan page, they are able to click a button that says ‘Give Thanks to the Dads in Your Life.’ The app allows users to search for dads within their FB network, along with messaging options. REDBOOK will then choose select messages to feature in an upcoming issue of the magazine.

Gale, publisher of research and reference resources for libraries, schools and businesses, has created a digital archive of the entire run of Liberty Magazine [pictured], including nearly 1,400 issues published between 1924 and 1950. Liberty, a weekly general interest title with a circulation of 3 million, featured the work of such prominent figures as H.G. Wells, F. Scott Fitzgerald, Walt Disney, Mahatma Ghandi and Babe Ruth. Earlier this year, National Geographic partnered with Gale to launch its own historical archive of issues from 1888 to 1994.

Tribune Interactive, the digital arm of the Tribune Company, launched two new tablet magazine apps for the iPad, featuring sports reporting from the Chicago Tribune and Orlando Sentinel. The Bulletin covers the Chicago Bulls, while Blueprint follows the Orlando Magic.

Comedy video site Funny Or Die launched an iPad magazine, The Occasional, for sale through the App Store and Newsstand. The bi-monthly app is priced at $1.99 per issue or $9.99 per year. Single issues sell for $3.99. The magazine features celebrity interviews, movie reviews and political commentary.