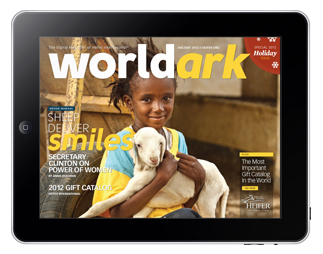 International technology, business and culture news brand The Next Web is seeing gains with its digital-only magazine. TNW Magazine saw more than 43,000 individual downloads and 116,000 sessions in October—reaching this milestone four months earlier than the company expected, a statement from the company says. The brand’s tablet magazine, which first launched in February, has so far released 10 issues and uses the Mag+ digital magazine publishing tool.

Heifer International, the global hunger and poverty nonprofit, is entering the digital publishing arena with an app for its World Ark magazine. World Ark has published continuously since 1994 and is a quarterly publication delivering original material on the issues of poverty, agriculture and changes in the developing world. The new app brings this content to life through photo slideshows and videos, stories from Heifer International projects, book reviews and infographics. The tablet app will be available on the App Store and on Google Marketplace.

A year after publishing the final print edition of Airman, the Air Force is unveiling a new digital version of the service’s official magazine specifically geared for tablet devices. The new tablet edition is built for Apple and Android products and includes photography, video and interactive content and design. Additionally, with its launch on the tablet, the publication will go back to being produced on a monthly schedule—budget efficiencies in 2011 led to the elimination of the printing budgets for all flagship service magazines.

Movie retail chain Blockbuster has launched a new digital-only monthly publication that is available on Android tablets, the iPad and Amazon Kindle products. Content will include exclusive movie trailers, new cinema releases and news as to what’s on DVD and Blu-ray, as well as gaming.