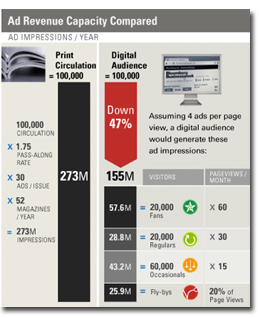 Despite efforts in 2011 for the digital advertisement sector (including premium ad launches by brands like Hearst), audience consumption is still faltering. Down 47 percent when compared to its print counterpart, digital magazines with a circ of 100,000 only garner a total of 155 million advertising impressions. Print magazines with a circ of 100,000 generate 273 million ad impressions, according to Scout Analytics.

According to Scout, digital “pass-alongs” (also know as fly-bys, or users that visit a site once a month) make up the minority of page views, representing only 20 percent of total impressions with 25.9 million views. However, this group also makes up a large portion of visitors.